Netflixable? “Love is Blind” in this twee romance 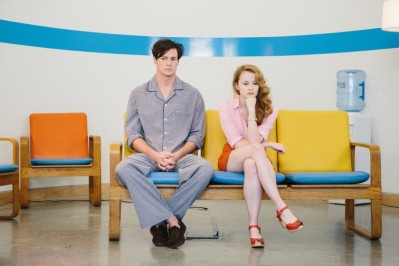 A young opthamologist-in-training is coveted by a suicidal demolition contractor while both are treated by an on-the-spectrum therapist whom the young woman pretends to lust after in “Love is Blind,” a romantic comedy that could not be more “twee” if it tried.

But it does. Try.

The young woman’s condition is a form of perception blindness. She cannot “see” her mother, and hasn’t for years. She argues about this with her Parkinson’s patient father.

“You and your mother are so much alike,” Dad (Matthew Broderick) says.

Throw in an albino peacock, some unconventional therapy that entails the demo man (Aiden Turner) shadowing Bess, who also cannot see him, and a little “dancing with myself” montage, some charming Disneyesque Hudson, New York settings and there it is — “twee” defined.

It doesn’t amount to much, and don’t bother looking up the medical condition (does not appear to exist), albino peacocks (they do) or any code of ethics that would let a determined, libidinous redhead (Tarbet) crawl all over a “therapist” (Benjamin Walker) who can’t even make contact.

But for a nothing of a movie, the vibe is pleasant and it’s an easy enough sit-through.

We don’t really get what’s made Russell (the Irish Turner, “Kili” in “The Hobbit” movies) suicidal. We hear him narrate/lament that life is “playing out like one of those sad country songs,” and we see him close his eyes to run stoplights.

Bess may not be our narrator, but at least her inability to see or hear her mother (Chloe Sevigny) is visited in a few flashbacks. Neither actress is given much to play, but the British Tarbet has a smorgasbord of issues to toy with, if nothing “real” to sink her teeth into. She comes off dull and uninteresting but pretty.

Walker’s quirky psychotherapist is the most interesting role, even if this “on the spectrum” thing in movie characters is over-used (this was filmed in 2015, came out in 2019). He meets Russell because the pounding the demo man is doing on the walls and floors next door, kicking up clouds of dust, is sending him over the edge.

“I’m on the spectrum, and I was raised Pennsylvania Dutch.”

With movies like this, I find myself looking at what drew some decent players in the first place. Brits love to sling American accents (flawless, here). Sevigny must have seen the many ingredients and thought there was more here.

Broderick, playing a doting and in his dotage Dad, gets to add a little infirm fatalism to his repertoire.

“Everything has an end,” he says of life, especially his. “Only the sausage has two.”

Two directors can’t do much with the veteran TV writer’s script save for giving everything a nice sheen, putting their starlet in a series of short skirts and a vintage Dodge Dart and her co-star in Springsteen shirts, working man stubble and dust, and hoping we root for some sparks to fly.

They don’t. Not really. But at least they gave their take on “twee” their best shot.