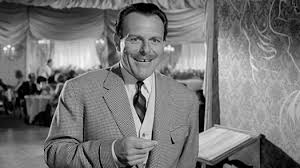 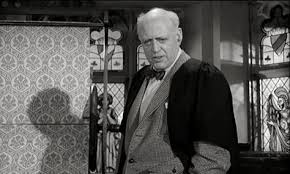 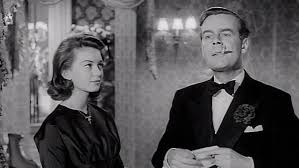 Alastair Sim came along entirely too soon to made his mark in any film version of “Lord of the Rings.”

And more’s the pity, because if ever was an actor who looked at home with a pipe and had the ostentatiously hairy ears for it, it was Sim, the devilishly funny character actor who was, for generations, the definitive Ebeneezer Scrooge.

He’s the focus of a new Film Movement BluRay boxed set collection of Brit comedies of the ’40s, ’50s and ’60s, the most famous of which is the last, “School for Scoundrels,” a glorious victory lap for the old “Ealing Comedy” style, even though Ealing Studios didn’t release this one.

If you’re only familiar with the brash, profane and in-your-face Jon Heder, Billy Bob Thornton remake (2006), here’s the quaint and ever-so-proper British farce that inspired it, a film of the Stephen Potter novels about a place where “losers” (men) learned to stop losing, to “one-up” rather than “one-down” in the game of life.

Ian Carmichael, straight man in many a classic British comedy, perhaps best known for being the definitive Lord Peter Wimsey in the detective series of the ’70s, is Henry Palfrey, a 40ish executive in charge of an accounting firm who shows up at Mr. S. Potter’s (Sim) School for “Lifemanship” is the town of Yeoril.

It’s where “underdogs” learn to become “top men,” where Mr. Potter and his instructors teach “the science of being one-up on your opponent at all times.”

Henry’s first meeting with Potter gives away his game — as in he hasn’t one. A quick exchange of greetings becomes a deft play on status, who is “Potter” and who is “Mr. Palfrey” or simply “Henry.” Henry’s so whipped he doesn’t even realize when he’s been whipped.

“My round, I think,” “MISTER” Potter twinkles at the oblivious Henry.

A flashback shows us Henry’s fortune stumble into “a girl,” his status at the office he’s allegedly running, being taken at a car dealership (“The Winsome Welshman,” run by Dennis Price and Peter Jones) and finally LOSING “the girl” (Janette Scott) after an upstaged date at a tony restaurant, and a head-games tennis match, both of which he manages to be “one-upped” in by the pushy cad Raymond Delauney.

As Delauney is played by that mustache-stroking rotter Terry-Thomas, you could see how that would happen. Raymond oozes “class,” or at least the snobby British version of it — reading the menu in French, ordering for “the table,” sticking Henry with the check, and then getting him on the tennis court where he can psyche out his inferior in front of “the girl” and further show him up with his new “Bellini” roadster (Astin Martin DB3S).

The car deal Henry, trying to compete, is hoodwinked into looks rather like “a Polish stomach pump,” Raymond cracks.

Henry is desperate enough to take “Lifemanship” classes from Mr. Potter, a course in “Gamesmanship,” another in “Clothesmanship,” “Carmanship” (how to deal with salesmen) and most importantly “WOO-manship,” the art of wooing and winning the fair lady.

The bulk of the movie is Henry’s effort to transition “from the theory to the practices.”

The Hollywood remake of this story brought a clever wrinkle to it by having our loser have to face off with his teacher (Billy Bob) in the quest for “the girl.”

Here, Sim is the wry teacher, observer and co-conspirator in Henry’s makeover and search for revenge. He’s delightfully droll, first scene to last.

Terry-Thomas was every American kid’s idea of a British villain in comedies of the ’50s into the ’70s. A leer, and gap-toothed shark’s grin and a “Drat” and “Bloody Hell!” (“LANGUAGE, sir!”) could reduce you to stitches.

The settings and set-ups in this Robert Hamer comedy — he is most famous for “Kind Hearts and Coronets” — show us an England of bowler hats and London buses, posh French eateries and Old School schools and clubs where the worn tennis nets and outdated manor house clubhouse scream “TRADITION,” and remind one and all that World War II did not to equalize the classes. Oh no, old boy. Not in the least.

“School for Scoundrels” doesn’t finish as well as it starts, and one can see where those remaking it felt at liberty to try and tighten it up, heighten the comic conflict. Director Hamer was an alcoholic and died just a couple of years after this came out, and needed co-directing help from others. just to finish “School.”

The movie achieves “classic” status by virtue of its influence as a style of class-clash comedy lives on in the wittier moments in the action franchise “Kingsman” and the like.

Eagle-eared viewers will recognize the voice of “The Book” from the famed “Hitchhiker’s Guide to the Galaxy” radio and TV series, Peter Jones. He’s one of the hustlers unloading “a 1924 Swiftmobile” on hapless Henry, who needs a car to impress the lady.

And Terry-Thomas and Sim remind us why they became brand names in British comedy, carving out niches that made each immortal — one an over-groomed exemplar of “Why we hate the upper classes,” the other content to grin through though ever-so-English teeth, never ever trim his ear hair, and give us lessons in how to throw the other bloke off his or her game, the only lecturer whose take on the Biblical creation of “Adam” is worth hearing out.

“Thus, the first loser was born.”

Credits: Directed by Robert Hamer. Script by Patricia Moyes and Hal E. Chester, based on the Stephen Potter novels. A Film Movement release

1 Response to Classic Film Review: “School for Scoundrels,” (1960) — Brit funnymen at their funniest