Documentary Review: A Snowboarder communes with powder as a “Woodsrider”

Posted on February 14, 2019 by rogerinorlando

“Meditative,” “contemplative” and “introspective” are the words that come to mind when weighing the merits of “Woodsrider,” a narration-free documentary about a solitary teen snowboarder camping and boarding the woods and resort trails around Mount Hood, Oregon.

Any seasoned moviegoer will recognize those as code for “not much happens.”

As in, there’s no real “dialogue,” just snippets of overheard conversation — occasionally garbled.

There’s no voice-over narration, no chatter from the subject of the film, Sadie Ford, answering questions asked by director Cambria Matlow or camera operator Jerrod North from behind the camera.

There are no inter-titles identifying locations (Government Camp, Oregon), people (Friends, buddies lovers?) or the exact time of year.

Truth be told, there’s precious little “wood-riding,” snowboarding through fresh powder, carving her own trail, off the beaten path, through the Spruce trees down a newly coated mountain. We get a lovely if not lengthy taste of that in the film’s last few minutes.

There’s no back story, so when we gather that Sadie’s unidentified mother is selling their mountainside cabin and outbuildings, and Sadie lets on that she’s “giddy” about the dirt bike in the barn, as if it maybe belonged to her father, and points both hands to the heavens and says “Thanks, man!,” we’re not sure if she’s thanking a dead dad or a heavenly father.

There is nothing that comes out of our subject’s mouth that approaches this long, poetic opening title crawl in which Sadie makes a Doppler Effect allegory that says she just wants to hear her life as it is now, “coming at me,” instead of relying on “memory alone, my life going away from me” as in the fading sound of a Doppler Effect train whistle.

Matlow’s almost-all-access film, following Ford as she hikes up a mountain, makes a mid-winter camp with a tarp, her trusty dog Scooter and fire, or watches the dancing and peer pong at a snowboarders’ party, does her laundry or balances on a parking barrier as she tries to make a phone call in town.

It’s an all access as inside look at the mundane, making the film something of a zen experience — “slow cinema” of a sort, perhaps capturing a favorite recreation of kids who will live long enough to not have enough snow or “winter” to do something they love.

That’s implied as Sadie waits out the snow-melting rain in an ever-shortening winter season, finding distractions with friends — swimming with a bunch of other girls in the heated resort pool — when she might prefer pounding down the slopes. 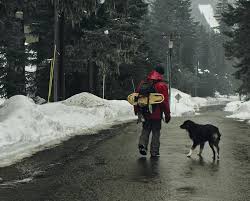 Matlow makes a nice contrast between Sadie hanging out with friends, night-snowboarding at a well-lit resort with pop music piped onto the slopes drowning out the noise of the ski lifts and snow machines and Sadie’s quiet solitude, trekking to her camp, splitting kindling, stoking a fire made on a garbage can lid, a fire of dubious warming value.

In a telling moment, she and her friends set up a little impromptu jump out of snow piled next to a big metal roadside phone company box. She makes the jump, slides onto snow until we hear the grind of her Maneater snowboard rumbling on bare pavement.

We don’t see this, it’s out of the frame. And for some reason, Matlow and North stick with this conceit a little longer, overhearing unclear conversations outside of the camera frame, leaving the camera pointed at a not-that-scenic corner of road, power lines and a few trees opposite a convenience store.

There’s just a hint of “art” to all this, of course. But just a hint. Mostly it’s just random and pointless scenes circling a heroine who is just a 19 year-old, living her life and doing what she loves after the rain stops.