Movie Review: The answers to a murder mystery lie “Beneath the Leaves”

The lifelong horrors of childhood abuse hide in plain sight in “Beneath the Leaves,” a more tricky-than-interesting thriller that might outsmart itself if it was any smarter to begin with.

It’s got kids who survive trauma and try to make something of their future, and kids who go on to repeat their trauma to a new generation. And what they’re all living with is memories of the worst things that can happen to children — torture, kidnapping, sexual abuse. So there’s something at stake here, at least.

A prologue shows us the worst of it, foster siblings growing up with a horrific stepfather who forces the nail-biting boy to endure brutal, bloody nail-trimming sessions, and a sad little girl who endures stepdad’s drunken attention after the boy has taken his punishment.

Twenty years later, Whitley, a notorious child killer played by the cadaverous Doug Jones (he  wore the amphibian suit in “The Shape of Water”) escapes from prison with several other convicts. And he’s on his way back to the old gold mining town of Julian, California, to settle old scores.

The police captain (Paul Sorvino) puts his cops in the hunt. But despite the fact that several murderers were among those who got away, Detectives Shotwell (Mira Sorvino) and Larson (Kristoffer Polaha) are put on “domestic disturbance” duty.

Is it because they not-so-secretly sleep together? Is it because they both drink, Larson to excess? Nope. Larson was one of a handful of kids to escape Whitley’s clutches years before. He’s “too close to this case.”

As the escapees kill here and there, and are killed themselves, Shotwell and Larson get caught up in the action.

Whitley is still at large, but not being allowed to pursue him, they have time to hit the bars where Larson drinks til he drops and Shotwell picks her spot to share her past trauma — she’s ex-military — with her lover. Since nothing cools him down, she’s given a new partner — the squirrely bird lover Abrams (Aaron Farb), an obsessive with convenient knowledge of the area flora and fauna.

And then Whitley’s escaped prey from 20 years before start turning up dead, trapped, tortured and murdered.

There’s not much for the actors to play here, with the Oscar winning Sorvino having her weepy moment of remembrance and Poloha (“Atlas Shrugged”) tossing furniture around in drunken and sober tirades.

Farb makes his character comically quirky enough to underestimate. Abrams and Shotwell check out the register of a sleazy motel where one victim disappeared.

The odd burst of violence doesn’t hide the sense that one and all are kind of sleepwalking through “Beneath the Leaves.” There’s a mystery to unravel, but no urgency in the actions of one and all. Only one of the fights has suspense and gets the viewer’s heart racing. 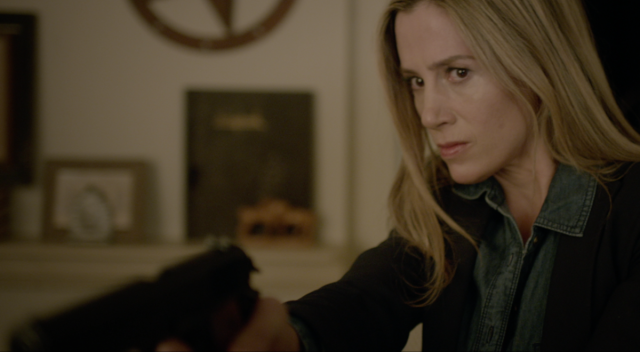 The novelty of pairing up the Oscar winner Mira Sorvino with her father, veteran character actor Paul Sorvino, wore off three collaborations ago.

Three screenwriters adapted a story by director Adam Marino (the Lou Ferrigno thriller “Ring Ring”), and they and he pay more attention to plot than dialogue or characters.

Some random scenes pay off. The opening, with children in  jeopardy, works better than anything that follows.

Some later scenes, with Polaha, Christopher Masterson of “Malcolm in the Middle” and Christopher Backus (married to Sorvino) giving us a hint of the living nightmare adult survivors of childhood abuse endure, pull the viewer in. Just a smidge.

Mostly though, “Beneath the Leaves” keeps us at arm’s length and the cast at half-speed, a disappointing combination when your aim was an intricate, raw-nerves thriller with visceral violence, surprises and characters we connect with enough to root for.