Posted on February 3, 2019 by rogerinorlando

Nobody is better at kvetching on screen than Matthew Broderick. Nobody.

In “To Dust,” he plays Albert, a community college science teacher who keeps calling a Hasidic husband in mourning over his late wife “Rabbi.”

Albert tries to brush the persistent pest of a man off. He makes suggestions that Shmuel (Géza Röhrig) refer to studies on the decomposition of pigs, which are consumed by bacteria and bugs pretty much the same way humans are. After all “Who doesn’t like bacon?” And then he realizes, after the Orthodox Jew has gone out and BOUGHT a dead pig, that even that’s not the best suggestion.

“If you brought me a pig, more like your wife…no offense…and buried her like a Jew…no offense…then I think we would probably be cooking…This, THIS is a mockery of science!”

“To Dust” is a deft and daft culture clash comedy, a dark farce that makes you cringe every bit as often as it makes you laugh. Both men are in mourning. Both have suffered loss. But in their unlikely pairing, maybe one can find peace and the other just a little of his missing sense-of-purpose.

Shmuel isn’t a rabbi. He’s just a man thrown completely off balance by his wife’s death, obsessed with how her body “dismantles” in the Earth after death, an obsession that seems driven by how unsatisfying the rigid funeral rituals of his faith leave him feeling.

He goes looking for answers. His aged Rebbe (Ben Hammer) is no help.

“How does she return to the Earth?” the morbid Shmuel wants to know. How long until she’s returned “To Dust?”

“Maybe you don’t think of these things, Shmuel,”

Visiting a non-Jewish funeral home is his first transgression, begging a Gentile (Joseph Siprut, hilarious) for the grim details because “Our burial societies are not very forthcoming in these matters.”

Mr. “Just a coffin salesman” gently says that “I can’t say we really check up on their progress” after embalming, but Shmuel won’t let it go and thus gets a deserved earful.

And yet, Shmuel persists. He takes his questions to New Hempstead Community College, and after engaging in a delicate bit of patriarchal roundelay with a secretary — “May I speak to a man, please?” “We appear to be out of those.” — he finds someone he can latch onto — Albert.

It doesn’t matter that repeatedly telling this hapless, divorced and burned-out science professor that despite the black suit, wide-brimmed hat, beard and ringleted “payot” (sideburns) that he’s not a rabbi falls on deaf ears. Albert, newly-divorced, stuck with vexing students and trapped in 1980 (he smokes pot while listening to Jethro Tull) is not the sort of guy who sheds anything — pests included — easily.

Director and co-writer Shawn Snyder’s film goes for a blend of the poignant and pathetically ridiculous. He sets its tone in an opening title, a quote from the Torah, followed by a Jethro Tull lyric — “God is an overwhelming responsibility.”

Shmuel’s wife dies in a cancer ward and he reaches to ritually rip his coat. And can’t. Fortunately, his mother is prepared. She has tiny scissors. But it’s a well-made jacket.

We see the body-washing ritual before burial, and Shmuel staring at the empty twin bed across from his in their townhouse. And we see his young sons start their own research when a punk at Hebrew school tells them their dad must have eaten a “Dybbuk,” an evil spirit.

The Hungarian actor Röhrig (“Son of Saul”) is much better at playing up Shmuel’s infuriating peskiness side than the grief the man is supposedly channeling through his new obsession. He bursts in on Albert’s classes and student office hour sessions. He buys one pig and pignaps another.

“Sorry for your loss,” never ends it. Never. He’s maddening in his persistence. 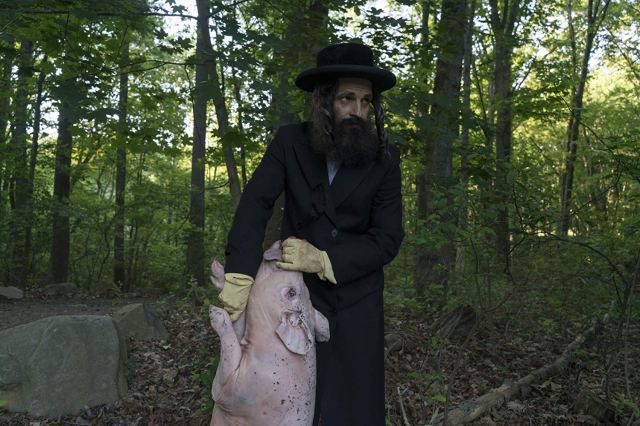 Albert gives up his cursing, his “Just LEAVE man!” and “You have seriously crossed the stated boundaries of the professor/rabbi relationship” impatience for a growing fascination for the science experiment he has inadvertently talked Shmuel into undertaking.

But boy, let Albert barge in on the holier-than-everybody Shmuel’s sheltered world, HIS home, and he gets an earful. His English seems shaky, but the man in mourning picks up American profanity in a flash.

The story takes both men on a journey, gives their characters “arcs.” But it vexes us, not just with Shmuel’s patience-pounding pestering, by never quite delivering the closure Shmuel, Albert and we are looking for.

But Snyder and co-writer Jason Begue paint a delightful alternative portrait of Hasidism and its practioners, going beyond the rituals and beyond respectful mockery, showing us foul-mouthed kids and an insular world clumsily at odds with the culture they’ve settled in.

In “To Dust,” they manage to walk a funny line between “We’re quaint and we have our ways, but we have the ANSWERS” and “We’re lost in this culture and our rituals won’t save or even heal us.” That’s no mean feat.

MPAA Rating: R for language and some disturbing images