Movie Review: Even the awkward can find love when they’re “Lost in Paris” 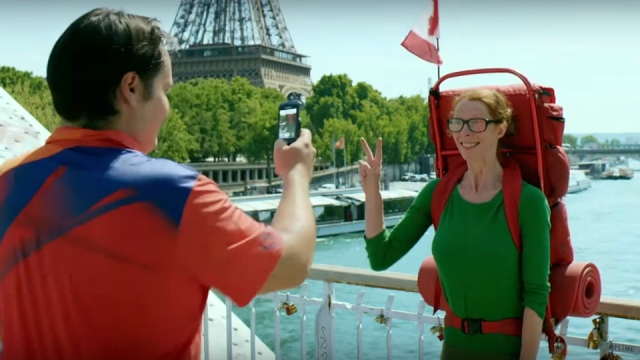 The lost art of slapstick — physical comedy — is so rarely practiced that when true masters of it show up on screen it’s like a surprise smack right on your funnybone.

The first form of film comedy, the ancient art of pantomiming your way to laughs, is what dazzles in “Lost in Paris,” a daft and deft farce about the Last Canadian Who Should Ever Get Herself into a Fix in the Most Gorgeous City on Earth.

That would be Fiona, played by Fiona Gordon, an Australian farceur who co-wrote and directed this twee romp. She and co-director and co-star Dominique Abel set the tone right from the opening images. A little girl and her French dancer Aunt Martha look down on the snowy village in the Great White North where they live.

It’s a model, a child’s fantasy of what “frozen” Canada looks like.

Martha tells her niece that she must leave and go to Paris. Fiona? She grows up to be a gawky, clumsy redheaded librarian — Another Canadian stereotype? — stuck in a town in perpetual winter (so it must seem), where every open door is an epic sight gag.

Decades have passed, and Martha is very old. A letter has arrived for Fiona pleading for her help in keeping Martha out of an old age retirement home. A misunderstanding sends Fiona, her bright-red backpack festooned with a Maple Leaf flag, away from the provinces and into the City of Light.

Being clumsy, Fiona poses for a photo with the Eiffel Tower in the background, and promptly tumbles into the Seine, losing her backpack, her passport, her money and her phone.

While she’s weeping to the Canadian consulate (in French, just because), a homeless fop (co-writer/director Abel) finds that backpack, dons some of her clothes, spends her cash and stumbles into Fiona, with whom he is instantly smitten.

Meanwhile, Aunt Martha, played by the great French star Emmanuelle Riva, is on the lam — hiding from the nurse and authorities who want to ship her off. There’s an old flame/vaudeville colleague (French farceur Pierre Richard) who figures into her past and present.

The sight gags include a pretzel-legged tango between our leads, a hilarious pup-tent sex scene (spied outside the tent), funeral mix-ups and an elderly take on the old soft shoe performed sitting on a bench at the famed Pere Lachaise cemetery.

Gordon has a hapless physicality that brings to mind Popeye’s Olive Oyl, and Abel makes an adorably unkempt version of every suave French masher the movies have ever shown.

The locations — mostly in Belgium, with the odd Paris insert — have a charming unreality to them, which spills over to the rest of the film. Drunkenly singing a toast to Lady Liberty (the Paris version of The Statue of Liberty) and hearing it answer back, staggering up the Eiffel Tower, generic funeral homilies that get out of hand, a cremation that threatens to go terribly wrong — all bits I can describe but which you must see to truly fall into the gags.

Which you will. Because whatever the international allure of Paris, it’s still hard to find an English speaker as you wander the boulevards. But the universal language of physical comedy as performed by the happy few who still practice it needs no translation.