Movie Review: R Patts kicks it up a notch in “Good Time” 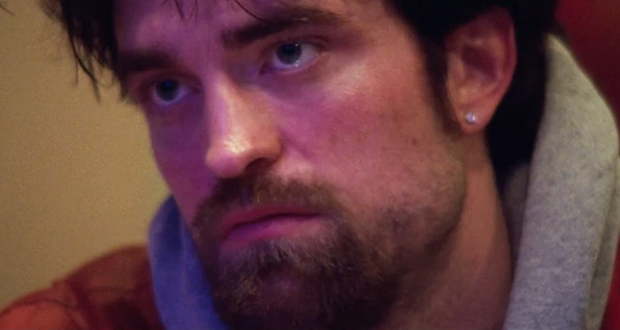 Robert Pattinson has his best role since he wiped off the “Twilight” glitter in as a stumbling, bumbling thief hurtling toward his fate in the ironically titled “Good Time.”

It’s a story of two brothers — developmentally-disabled Nick, played as thick and short-tempered by the hulking Benny Safdie — and Constantine “Connie,” the “smart” one, who doesn’t want to see Nick lumped into with the state’s special needs system.

It’s what Connie (Pattinson) does after he yanks Nick out of a psyche evaluation that will make your jaw drop even as it kick-starts the picture. They don masks and rob a bank.

There’s dark humor in a lot of what Connie does, beginning with the robbery. He’s costumed them both as construction workers, and donned semi-convincing rubber African American face masks.

They don’t talk. He just slides misspelled notes to the teller. And when she slides a note back to him that this is all that’s in her drawer, “policy,” and Connie REALLY needs $65,000 — so go back and get more — we figure out Nick isn’t the only slow brother.

As Connie leads them through a clumsy get-away, into the fast food restroom where they try to wash off the dye, through a mall where Nick is caught and into a night of running, improvising, bullying and seducing his way out of this mess of his own creation, Connie teaches us the difference between native cunning and smart.

There’s an unstable older woman (Jennifer Jason Leigh) that he’s convinced he’ll take on a trip with the money — only now he needs it to post his brother’s bail. Fine.

“Just got to get him out of there before something bad happens,” he shouts, giving her the bum’s rush into the bail bondman’s office so they can access her mother’s credit card.

No dice. Yelling at the bondsman (Eric Paykert) only produces this nugget — Nick was hurt, and is in protective custody at a hospital.

Fine. Connie’ll break him out of there. He outsmarts the staff and the cop on guard, only to figure out he’s freed the wrong prisoner in a neck cast, his face covered in bandages.

Fine. He’s gotten this junky Ray (Buddy Duress, perfect) out of a room, off his life support monitors, into a special assistance city bus and talked their way into the apartment of a grandmother and her sassy, streetwise but naive granddaughter Crystal (Taliah Webster). His face shows up on the news on their TV? Distract Crystal by making a move on her.

Ray comes to, starts this rambling medicated monologue about how he ended up in police custody in the hospital, and Connie decides they’ll go get some cash and LSD Ray’s buddies stashed in an amusement park’s funhouse. In the middle of the night.

I love the way the Safdie Brothers’ (“Heaven Knows What”) script just stumbles through this night, forcing Connie to rely on that native cunning and the one thing that’s gotten him through life up to this point — his smoldering allure to women.

Pattinson, who never lets on that he’s wearing an alien accent, gives Connie just a hidden hint of charm. Like the actor himself, women just get lost in those blue eyes, and he can talk them into anything.

The violence, when it comes, is shocking. The coda is abrupt, but fitting.

And that all makes for a night-long “Good Time” that will get under your skin and stick with you long after its consequences settle in on the impulsive, not-that-bright lowlifes it is about.