Movie Review: Dinner guests get an earful from “Beatriz at Dinner” 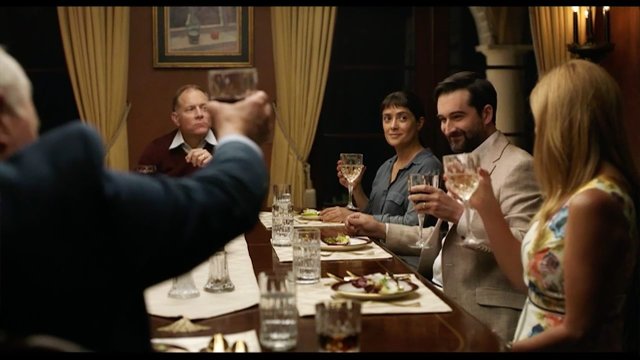 Beatriz wasn’t supposed to be there. Not at dinner, anyway.

In the Red State/Blue State America of “winners” and “have-nots,” a working class Mexican-American like her wouldn’t sit down to a celebratory dinner with the callous super rich. She’d be serving them.

But she’s had a rare, deep connection to the family hosting this meal where a rapacious developer and his legal and financial team toast their latest success, getting a deal past environmental regulation and the government meant to impose it. And so they, and she are exposed to each other and their wildly divergent worldviews thanks to “Beatriz at Dinner.”

Mike White, who scripted biting, edgy satire of this sort (“The Good Girl,””Chuck and Buck”) before making his fortune with “School of Rock,” serves up an unsettling and generally deft comedy of manners with this clash, a film that greatly benefits from subtle, stinging performances by Salma Hayek and as her opposite number, John Lithgow.

Beatriz wears the weariness of working people everywhere, as wells as a profound sadness. A lonely member of the working not-quite-poor, she gives massage therapy and alternative medicine treatments to cancer patients near her working class Altaduna, California home. She copes with an intolerant and intolerable neighbor, lives with needy, neurotic dogs and a goat, drives a barely-functional VW and dreams of a childhood on coastal Mexico, drifting romantically among the mangroves.

Her life is thrown into sharpest contrast through her other gig, massaging clients like Cathy (Connie Britton), the wealthy wife of a developer (David Warshofsky) living in mansion in a gated community on the coast.

Cathy’s world screams “Rich White People’s Problems,” but she considers Beatriz a friend. And when that VW quits, she invites Beatriz to stay for dinner. The movie revels in watching the out-of-place Beatriz as she quietly observes the guests arriving wearing clothes and jewels that cost more than her broken car.

She is sensitive, a little embarrassed and left out. She interjects in the conversations only when it touches on her areas of expertise — holistic treatments for kidney stones, muscle tensions, “hair therapy” and the like.

But the overbearing guest of honor, the hotel developer Doug Stutts (Lithgow) and the white wine she sips brings out more from her. This sensitive “healer”is forced to rub up against a callous user and abuser of Mother Earth, animals, government loopholes and people. So we can’t help but expect fireworks.

White, and director Miguel Arteta (“The Good Girl,””Cedar Rapids”) are determined not to provide them. Our antagonists argue, dismiss and try to avoid rolling their eyes at each other’s positions. But they take care to avoid going over the top into unforgivably rude.

Hayek conveys sorrow and a hint of pity for these short-sighted, money-over-all “winners” society has foisted on people like her. And Lithgow, playing a Koch Brother without an “h,” takes pains to be polite even with someone he is hard-wired to regard with contempt.

His tactless “But where are you REALLY from?” in their introductions — wanting to know her legal status and how she got into the U.S. — falls just shy of ugly. He doesn’t know people like her and is indelicate with his questions. Her counter, “But where are YOU really from?” is the most telling exchange in the picture. 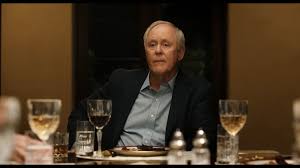 He, like those on his side of the political, financial and cultural divide, has chosen to play down his own origins as he moves in a world where wealth is an entitlement rewarded with TV notoriety — “I have opinions, and because I have money, people listen.”

Beatriz’s back-story unfolds in between scenes in which she all but recoils, appalled at what these people are celebrating, at their lifestyles and at the amorality of their choices. Stutts’ bragging about big game hunting in Africa may physically wound her, and Arteta’s camera captures the first signs of discomfort among the other guests. Chloe Sevigny and Jay Duplass are rich lawyers who look down in faint recognition of the deal they’ve made with the Devil to get where they are.

Stutts may be a bulldozer, running over everything and everyone in his path, and Beatriz may seem like a “Star Trek” “empath,” all feelings and hurt — but White and the players take care to never let them drift into caricature.

The adherence to unwritten social codes is so strict that we blanch every time they’re broken. Only when the film takes its most radical third-act jolts in tone does it feel forced, contrived. And the ending is simply abrupt.

White, who just turned 47, has looked at America’s divide and figured out what every other pundit has — that we’ve stopped listening to each other. The gates are metaphorical as well as literal. But like every defensive wall ever built, they cannot separate us or protect us from each other for long. Sooner or later, a Beatriz or Stutts is going to be in our face and force us to deal with him or her.

So the message of  “Beatriz at Dinner” has merits beyond this curtailed social satire’s running time. The longer that conversation is delayed by social niceties, the more alarming that reckoning is going to be.

MPAA Rating: R for language and a scene of violence |