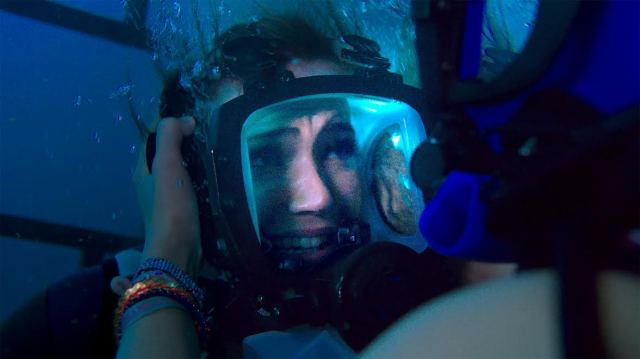 A great wrong — Ok, a minor wrong — is righted with the belated theatrical release of “47 Meters Down,” a trapped-in-a-shark-cage thriller whose production values suggest it deserves better than a direct-to-video fate.

The film’s star, Mandy Moore, has experienced a career re-boot, thanks to TV’s hit weeper, “This is Us.” Claire Holt (“Pretty Little Liars,” “H2): Just Add Water”) has always looked great in a swimsuit.

And the murky blue void that co-writer/director Johannes Roberts and underwater camera specialist Mark Silk present has menace enough without the not-noticeably-digital sharks that menace our protagonists.

What’s summer without an “Open Water” or “The Shallows”? Sharks are still scary, even if Asia is devouring them like the potato chips of the sea.

So never mind the blips of logic in the script, the fact that it requires Mandy Moore to shriek into her mask — “We’re gonna DIE down here!” — too many times, to narrate everything she (and um, we) see her do.

“Get the spear gun!”

Moore and Holt plays sisters vacationing in sunny Mexico, where the drinks have umbrellas and the rules for dive charters are, we’re told, pretty lax.

Lisa (Moore) is just getting over a breakup. Sister Kate (Holt) is her replacement companion on this holiday, somebody to help her shake the funk that being dull and predictable has gotten Lisa into.

Why not an impulse trip into the Gulf on a low-rent shark experience charter with two local hunks they’ve just met?

Nothing to worry about. The boat may look like it’s seen better days, and the actual shark cage they’ll sit in when they’re lowered five meters down appears to be held together by rust. But the corners-cutting captain (Matthew Modine) is American, the actual gear is top drawer — full-face masks with radio links.

Lisa’s never dived in her life, but they don’t need to know that. “Is this even safe?” is replaced with “Think of the (social media) pictures!” Her ex will have to rethink his whole “boring Lisa” complaint. 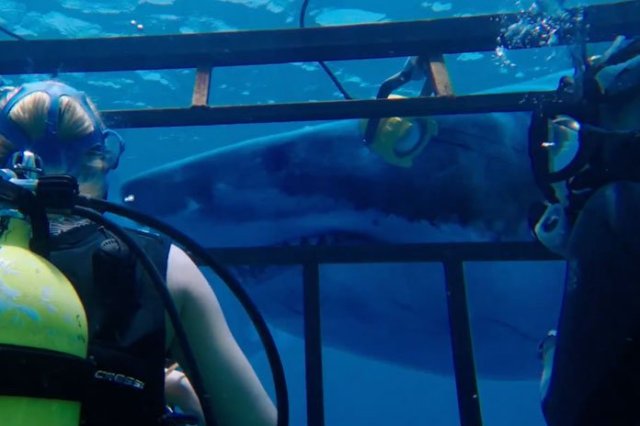 Then, the crane breaks and they’re dropped to the bottom, out of radio range. They’re running out of air, and will get the bends if they ascend too quickly.

And the fact that the boat crew has filled the water with crimson chum, luring Great White Sharks — actually quite rare in the too-warm/too BP-polluted waters of the Gulf? That’s just another, grislier way to die.

The plot presents the sisters with some awful dilemmas and the viewer with plenty of “Oh come on” moments.

But any thriller set in the blue-grey isolation of the domain of sharks is fraught with possibilities for frights. And Roberts, a horror vet (“The Other Side of the Door”) knows the when, where and how to place his shocks.

Silly as it sounds, “47 Meters Down” is downright intense. And it manages the odd surprise twist, too.

It still has a hint of “Just Wait for Netflix” about it, but that denies you the fun of sitting in the dark, laughing and muttering at the characters on the screen, with a hundred other fans of cheap thrills and summer cinema shark cheese.