Movie Review: Ghosts of the Holocaust haunt “Past Life” 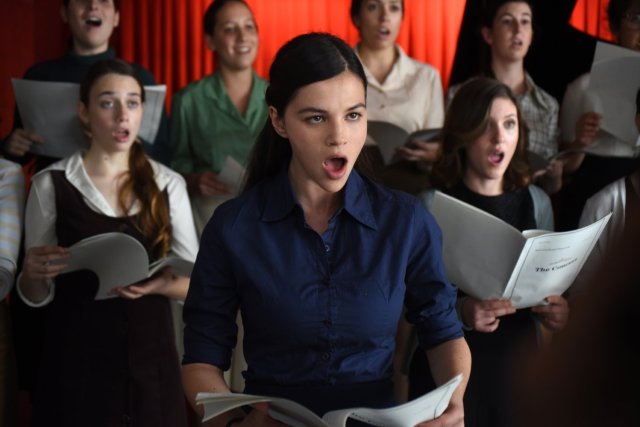 The Holocaust has been so exhaustively covered as a movie subject as to become a Hollywood punch-line.

But the Israeli drama “Past Life” finds a new angle, a new corner of collective guilt. Avi Nesher’s “What Dad did during the Holocaust” mystery may not have the most satisfying resolution, but that’s part of the point.

Sephi (Joy Rieger, introspective and demure) is a star soprano with her college choir, an aspiring composer willing — even in 1977 — to go to West Berlin to perform — if it can further her career.

Meeting the famous choral composer Thomas Zielinski (Rafael Stachowiak) could pay dividends, too. But Zielinski’s aunt has come with him to the concert. And she recognizes Sephi’s last name, and her face. That leads to a “Marathon Man” moment. The old woman has to be dragged, shrieking (in German), “Murderer! Daughter of a murderer!”

Yes, she knew Sephi’s father. And since Sephi’s sister, Nana (Nelly Tagar), a feisty Tel Aviv magazine writer who argues about Israel’s faults and “the Holocaust excuse” Israelis have historically made for any territorial grabs or “re-settlement” schemes, Sephi has someone willing and eager to unravel this mystery.

Dad (Doron Tavory) is a respected Jerusalem gynecologist, humorless, touchy. But in flashbacks, we get a hint about why his two daughters think this guy could be a murderer. He never talks about how he, a Polish Jew, survived when millions didn’t. And he used to slap the girls around, and worse, growing up.

“You can’t understand the world ‘back there,'” he explains. Not so fast, Dad, they decide.

Nesher doesn’t do a great job of hiding her cards when it comes to the mystery in this “inspired by a true story.” We know what’s up, more or less, from the first moment father Bruno hears that his girls have talked to people who knew him “back there.” His wife (Evgenia Dodina) gets a stress-induced nosebleed.

“Here we go again,” she mutters, in Hebrew with English subtitles.

The story takes on melodramatic children-suffer for the sins-of-their-parents tones, or as on old kibbutz-dweller puts it, “Parents ate sour grapes, and now their children have rotten teeth.”

But the larger idea, that in order for people, the world, Israel and Israelis to live on, there has to be an emotional statute of limitations on what people did in the distant past  — to survive, following orders, etc. — has weight.

Nesher’s re-creation of the Israel and Europe of the Cold War ’70s is vivid and biting. Sephi suffers under a sexist, bunker-mentality culture at home, and feels the burden of a some-crimes-cannot-be-forgiven or forgotten mentality abroad.

“Past Life” is best appreciated as an attempt to finally give permission, at the source of the grievance (Israel), not to forget, but to at least forgive.  Not every horror was committed by gentiles, not every sin was mortal, Catholic or Protestant in nature.

At some point, the past is passed.