Posted on June 1, 2017 by rogerinorlando 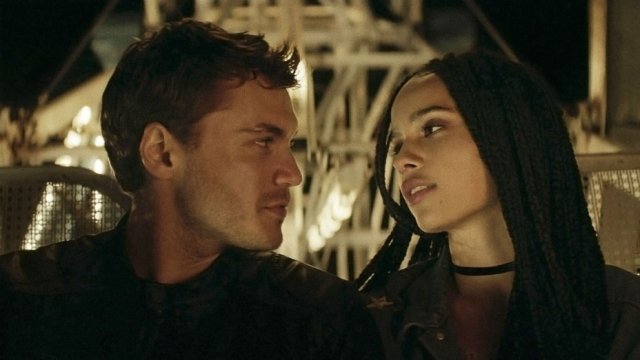 They meet by accident — literally.

Vincent (Emile Hirsch) is purposefully motoring across town in his vintage ’70s Chevelle, Roxxy (Zoey Kravitz) is in the car in front, T-boned at an intersection.

When the offending car empties and the enraged, “Where’s my MONEY b—ch!” driver starts beating on her, Vincent intervenes — or tries to. Much violence later, they’re off, two strangers on the road to rural Louisiana; her to lay low and get some cash together, him to pick up old family ties.

But violence tags along with them, as Vincent gets tangled up in local feuds involving his tough-talking, street patois-slinging punk of a brother, JC (Emory Cohen) and Roxxy is entangled in local biker boy jealousies with JC’s girlfriend (Zoey Deutch).

“Vincent N Roxxy” wears the indie film cliches of its rough-hewn road romance with pride. He is a man with secrets, cigarettes and stubble. She has a past, a dead brother and never met a belly-shirt she couldn’t rock.

Gary Michael Schultz’s picture starts cryptically, two aimless young people without a past — until we learn about it. And he provides Kravitz (“Big Little Lies”) with some flinty femme fatale one-liners.

“Is that what you do, drive around in your cool car, trying to help girls getting beat up?”

Well into their impulsive 700 mile road trip (to Zachary, Louisiana), “You got something you want to ask me, now?”

It’s a tale that sees the poetry in the ruins of an old drive-in theater, but would prefer to wallow in the escalating mayhem that ensues when dead end young men — of any race, of any hopeless ghetto — let their desperation and testosterone get the better of them.

There’s not much room for performance in all this. Cohen does that acting school rendition of small-town-punk thing, Hirsch tries to simmer and Kravitz brings a little heat and paranoia to Roxxy.