Posted on January 27, 2015 by rogerinorlando 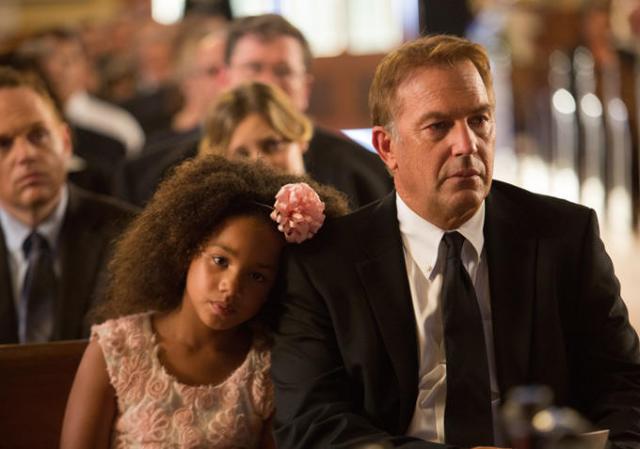 “Selma” wasn’t the only film about race to get short shrift from Oscar voters this past year. “Black or White” is a frank, touching and very well-acted melodrama about child custody and cultural perceptions of “blackness” and “the race card,” and could have earned Octavia Spencer and Kevin Costner fresh Oscar nominations.
Mike “The Upside of Anger” Binder’s latest teaming with Costner has more anger, mixed with alcoholism and a bitterness that may mask racism.
Elliot Anderson (Costner) tells his granddaughter Eloise (Jillian Estell) “We had a bad night last night.” Turns out, the little girl’s grandmother died. Granddad’s been drinking pretty much ever since.
A couple of days pass, with him drinking and driving her to school and stumbling through tying a ribbon in her hair.  She needs him to ease off the sauce, to be tough with her, the way grandma was. He needs to remember to make her brush her teeth.
“Say it like you MEAN it,” the seven-year-old pleads.
Eloise is of mixed race. Her mom’s gone and her African-American dad isn’t in the picture. But those phone messages Elliot is ignoring? Not returning that call is going to cost him.
Grandma Rowena (she goes by “Wee Wee”) wants to see her grandchild. Elliot’s kept them apart, and his reassurances “Come by any time you like” aren’t sincere. Wee Wee (Spencer) has a brother (Anthony Mackie) who is, like Elliot, a high-powered corporate attorney. The custody fight to come will be about “support, community, history.” She doesn’t think her not-quite-in-law is raising the kid “black” enough.
“She’s NOT black!” he counters. “She’s HALF black!”
Binder and Costner soften whatever racial attitudes that Elliot keeps under wraps, in between drinks. Elliot hires a math tutor for this kid (what he really needs help with is combing her hair), and the tutor is an African over-achiever (Mpho Koaho) who becomes the ever-drunk Elliot’s driver and comical confidante.
The script sets us up to buy into stereotypes, then flips those on their head. The rich suburbanite isn’t some cross-burner, though we start to wonder. And Wee Wee may live in South Central Los Angeles with a vast brood of kids and grand-kids surrounding her, but she’s a successful entrepreneur. Her son (Andre Holland) seems like a crack-smoking cliche, but Spencer’s innate intelligence and fight make Wee Wee a nurturer, upbeat, positive, even if one of her kids is a bad apple.
“I’m just lookin’ out for my babies.”
Binder’s film decidedly tilts toward his (white) point of view, but the games he plays with expectations are fun — a black female judge (Paula Newsome) who stares down the outspoken Wee Wee in court, the conservative white guy who rolls into South Central with the ne plus ultra of rapper rides, a black Escalade. Having Elliot hallucinate his dead wife (Jennifer Ehle) but get no advice from her is a twist. As with “Anger,” Binder’s characters fire off glib, politically incorrect insults and characters make some pretty solid arguments in favor of their political incorrectness.
Maybe it plays it too safe, and Costner, an actor doing some of his best work decades after “Dances With Wolves,” should have found more testy edge to this guy, just to make us uncertain about his darkest feelings. But “Black or White” makes a very entertaining movie for a post-Obama America, a smartly observed story that recognizes we may never be a post-racial America.

MPAA Rating:  PG-13 for brief strong language, thematic material involving drug use and drinking, and for a fight

Credits: Written and directed by Mike Binder. A Relativity release.