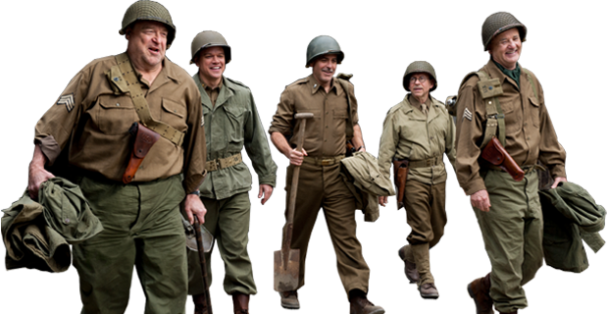 ”The Monuments Men” is the “Last Vegas” of World War II movies. A roughly true/fictionally embellished account of the efforts of American arts scholars — drafted into the Army — to preserve the artistic patrimony of Europe from the scourge of combat and theft by the Germans, it is a cute but clunky ensemble piece that director George Clooney rarely bestows with the gravitas and jauntiness this material demanded.
They changed the names — well, of almost everyone — from the historic “Monuments Men,” whose exploits were recounted in the book by Robert M. Edsel and Bret Witter. Clooney and co-adaptor Grant Heslov had to sex it up a bit, give the tale more thriller elements. But it still makes for a genial combat picture starring a bunch of guys “too old for this,” as indeed were many of the curators, artists and scholar-heroes who did the work.
Clooney plays the man tasked with assembling a team of men of experience, all of them shoved into ill-fitting uniforms, given rudimentary basic training and thrust into the combat zones of Europe, battling murderously thieving Germans, suspicious Occupied French and their own “No painting is worth a GI’s life” field commanders.
“This is our history, Stokes (Clooney) pep-talks his troops. “It’s not to be stolen or destroyed. It’s to be held up and admired.”
But that’s what the Nazi leadership was doing — swiping the famed Ghent Altarpiece, Michelangelo’s “Madonna of Bruges” and pretty much anything that wasn’t nailed down in Paris as the Allies swept Eastward after D-Day.
John Goodman plays a garrulous sculptor, Matt Damon an art restorer and museum director with a misplaced confidence in his command of French, Bob Balaban and Bill Murray are mismatched curator and architect with enough training to track the thievery. And Oscar winner Jean Dujardin (“The Artist”) and Hugh Bonneville (“Downton Abbey”) are the token Frenchman and Brit on the team.
The story skips across locations — slowly — and shows us the history, Nazi Hermann Goring’s art “shopping” in the museums of Paris and the stoic efforts to track the thefts by heroic French curator Claire, played by Cate Blanchett.
It is difficult to justify the changes made to the real-life heroine of the French Resistance, Rose Valland, to create Blanchett’s character, a big reason this movie was removed from Oscar consideration. Another is that the movie just isn’t that good.
Corny moments abound, and occasionally, the players hit their old-fashioned war movie cliches so hard you wince.
“Are you a Catholic, Lieutenant?” a priest asks the alcoholic Brit played by Bonneville, as he furiously plots to save the Madonna statue.
“I am…tonight!”
Changing names and tarting up the characters doesn’t quite spoil the generally solid attention to detail, and doesn’t ruin several genuinely poignant moments. Some of the banter sings, but much of it feels forced. The “assemble the team” scenes are squeezed in beneath the credits, spoiling the sure-fire “Magnificent Seven/Dirty Dozen” moments that promised.
And while Clooney and the producers create a somewhat lived-in World War II, nobody and no city is nearly dirty or battered enough to feel right. A telling moment, an extra cast as a GI totes a heavy belted machine gun across the screen and looks as if he’s never seen one before and that he’s not used to heavy lifting.
This could have been a lovely historical lark, a bunch of grizzled faux soldiers tracking art, outwitting Nazis and occasionally dealing with a blast of tragedy and “what this war is really about” reminders. Clooney, for the first time in his directing career (“Good Night, and Good Luck,” “The Ides of March”) never finds the sweet spot, and never quite wrestled the script into a shape entertaining enough to make the liberties he and Heslov took with the facts worth it.