Weekend movies — “Jack Ryan” passes, but poor grades for “Ride Along,” “Devil’s Due” and “Nut Job” 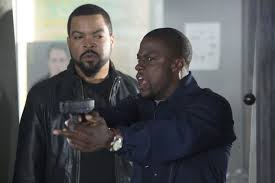 Paramount did itself no favors by showing “Jack Ryan: Shadow Recruit” to a few New York and LA and trade publication critics in advance, and stiffing the rest of us with screenings after deadline.

The first wave of reviews — and really, there wasn’t a critic in that lot I’d call “elite” — panned it. But now, after everybody has seen it, it’s sitting in the positive reviews realm. It’s not terrible, and it is a tribute to America’s reviewing class that we didn’t pre-judge the movie as crap simply because Paramount was hiding it. Let’s hope the studio realizes that. Now.

“The Nut Job” is earning awful notices, which I attribute to critics refusing to treat animation as kids’ fare. This one certainly is, and is much more entertaining and audience friendly than much of what’s been shoved down parents’ throats the past year or two. I liked it more than most, but reviews won’t be helping this one.

“Ride Along” is more proof that Kevin Hart has gotten rich and happy and lost a lot of the edge he seemed to have a couple of years ago. A star-vehicle cop buddy movie, and he doesn’t deliver the goods. Not funny, weak writing, a slow-paced film that doesn’t catch him at his most manic. Tim Story deserves a big chunk of the blame here. Terrible reviews for this one, across the board.

“Devil’s Due” is an occasionally scary but uninvolving, soulless “impregnated by the Devil” thriller. Some cool effects, but blase performances create characters we don’t care about. Poor reviews for this one.