It was time of wide ties and velvet suits, jangly jewelry, open shirts, big hair and boat-sized cars. After Watergate, cynicism was everybody’s default mode. The economy was in the toilet, disco was on the radio and everybody was corrupt.
“American Hustle” reminds us that as jaded as we’ve gotten about crime and a rigged economy and government and politics, none of this is new. And if you’re looking for a place where right and wrong dissolved from black and white to shades of grey, this might capture it.
David O. Russell’s caper comedy is built around the 1970s ABSCAM scandal, a wide-ranging FBI sting operation from the golden age of such stings. It’s a film of bottom-feeding con artists, ambitious politicians and insanely ambitious law enforcement folk. And it makes delicious fun of the zero tolerance zeal built into this scandal and its true cost to our ability to get big things done.
Christian Bale is Irving Rosenfeld, a New York low-life who runs loan scams, art forgery scams and a chain of dry cleaners and glass repair shops all over The Five Boroughs.
He’s got a soul-mate, a paramour and partner in crime — Sydney Prosser (Amy Adams). Like Irving, Sydney’s a dreamer. When she buys into his profession, a fake English accent becomes her calling card and Lady Edith Greensly becomes her name. She has “connections to London banking.”
Irving is fat, with an epic comb-over not quite covering his bald pate. But sexy Sydney, who never met a bra she liked, shrugs that off. She can see through people, size them up. And she’s good at rationalizing their scams, aimed mainly at desperate small business people.
“Everybody at the bottom crosses paths eventually, in a pool of desperation.” 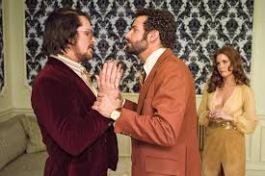 And then they con the wrong guy. Richie DiMaso (Bradley Cooper) is a fanatical F.B.I. agent living the “Saturday Night Fever” dream. He’s got a room in his mom’s home, a fiance that he has no interest in saddling his future to and his permed hair in curlers every night. Richie is every bit the striver that Irving and Sydney are. But what he wants is the glory of tearing down a culture of graft, fraud and corruption. These two, strong-armed into setting up cons to snare bigger fish, are his next promotion.
Russell has plenty of fun with the garish era that was the setting — “This new thing — a microwave…It’s scientific! Don’t put metal in it.” — and he never lets himself get too caught up in the actual facts of this sting. That involved a fake Arab sheik, a lot of money promised to help re-launch the casino industry in Atlantic City and the politicians and mobsters who desperately want that to happen.
“Some of this actually happened,” the opening credits joke.
The three leads narrate the tale. And through them, others find their way in.
Jeremy Renner is a hard-charging, idealistic mayor, Shea Whigham (of Boardwalk Empire) is a shady operator, Louis C.K. is the embattled, common-sense peddling F.B.I. boss that Richie crosses and Jack Huston is a mob lieutenant.
And Jennifer Lawrence is Rosalyn Rosenfeld, Irving’s wife. That’s right. He’s got an unstable child bride who was a single-mom when she married him. Rosalyn is the juiciest character of the lot, a  Martha Mitchell for this Watergate Scandal, a loony loose cannon who cluelessly acts on every impulse — and her favorite impulse is to hurt the husband she knows is cheating on her.
“American Hustle” is about over-reaching, about a sting that grows more dubious and more dangerous the more people it ensares. Irving, blackmailed by the Feds, can see this. Sydney, playing all the angles, worries. But Richie charges on, a lunatic on some sort of hang’em all mission. And he’s got his eye on Lady Edith.
Cooper gives Richie an antic dizziness, which really pays off in his confrontations with the hapless, put-upon comic Louis C.K. Bale plays Irving without a hint of vanity and cagey, overmatched resignation, a man who is no longer “in control” of his scams or his women.
Lawrence is getting the lion’s share of the Oscar buzz for her nasal-voiced, self-absorbed idiot, a happy drunk and a young woman jaded beyond her years. But Adams crackles with bitter longing in scene after scene. Lawrence has the showier moments in their confrontations, but Adams makes their scenes work.
The disco decadence, the seedy era before Times Square became a theme park, the lowered expectations of an endless recession, everything that was then and is now makes up “American Hustle.” And that’s what makes this the best movie of this holiday season.