Movie Review: An Artist’s Life of Trauma demands that you “Never Look Away”

Posted on February 22, 2019 by rogerinorlando 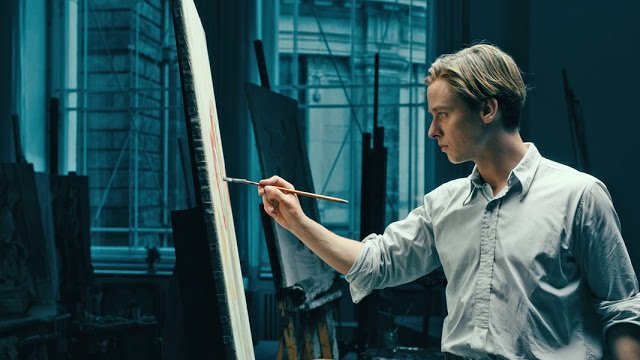 Process and the life one has lived informs an artist’s work, and that’s what the Oscar-nominated German drama “Never Look Away” is about.

Florian Henckel von Donnersmarck returns to his “The Lives of Others” roots, rooting around Germany’s past for his own art in this Best Foreign Language Film and Best Cinematography (Caleb Deschanel was DP) nominee.

Donnersmarck meticulously recreates several eras, studiously documents an artist learning his craft, experimenting with every style and fad under the post-war sun, and finding his voice in the horrors he saw, the losses he felt and the Nazi monster he sees prospering through it all.

The writer-director lets the film’s point of view shift between that of the young artist to his institutionalized young aunt, to the eugenics-believing Nazi doctor who has her gassed, creating an omniscient narrator that knows a lot more than our somewhat passive hero should have access to.

And Donnersmarck tells this tale with the patience of Job, maddeningly letting chapters and scenes draw out and amble on. It takes two hours and 45 minutes for the movie, which has started with wrenching memories of childhood, to hit its “This is getting good” coda. It’s a 100 minute movie softly punching its way out of a three hour and nine minute (credits included) bag.

“Look Away” follows an artist from his traumatized, World War II childhood, through tragedy and heartache into purpose and message — thirty years of what it takes to make Kurt Barnert (Tom Schilling of “A Coffee in Berlin“) a star in the wide open art scene of the 1960s.

Growing up under Hitler, young Kurt (Cai Cohrs) loves to draw in a country where art is mistrusted, condemned as “decadent” and “perverse” by the Deplorables in charge. But his free spirited young aunt (Saskia Rosendahl) takes him to the infamous “Degenerate Art” exhibition of modern artists banned under the Nazis. Their guide might ridicule Picasso and Kandinsky and their “degrading” depictions of women and “perversion of reality.”

“Maybe I don’t want to be a painter after all,” little Kurt mumbles to her (in German, with English subtitles).

Aunt Elisabeth gives the kid a smirk to assure him that his dream is worth keeping. She preaches that truth is beauty, and that pursuing the sublime — she herself exults in the note a chorus of bus horns make — is all anyone should ever aspire to.

She’s a little too free with her expression, not shy about her nudity.

“Never look away,” she tells him.

But her mental health is questionable, and the family’s concern faces the Reich’s “solution” as we drift into the Nazi conference rooms where sterilizing and “removing” “useless” members of the gene pool is decided upon.

The doctor treating Elisabeth, Professor Seeband (Sebastian Koch of “The Lives of Others”) is an enthusiastic supporting of this murderous application of Darwinism.

The war ends, Seeband finds a way to survive under the Russians in the Soviet East, and Kurt begins indoctrination in the art of “socialist realism” in East German art school. He  meets another beautiful young Elisabeth (Paula Beer) at art school. She’s studying fashion, while he’s stuck with the communist propaganda art of the day, not hiding his talent (others use stencils, Kurt can freehand everything by now).

Elisabeth gets pregnant, but her disapproving dad performs an abortion. Dr. Seeband, it seems, still wants to assure the sanctity of the Master Race gene pool.

Seeband may let them marry and flee to the West, but his cruel specter hangs over the marriage and over Kurt. Does he know what the good doctor knows?

Oliver Masucci makes a wonderfully pretentious director of the art school in Bonn where Kurt is exposed to the full “decadence” of the West, in art form, among classmates experiment with nail sculptures and swinging potato mobiles. The student tries paper mache sculpture and Jackson Pollock spatter style paintings.

But the master, who “works in grease” and never takes off his hat, who inveighs that art trumps politics when it comes to “freeing” yourself and The People, sees something in him.

“Your eyes tell me you’ve seen more than most of us.”

Donnersmarck is not above the occasional groaner of a line or plot device. The new Elisabeth, “Ellie,” realizes her father rendered her sterile.

“Your paintings must be our children, now.”

Schilling makes Kurt such a passive hero that it’s difficult to embrace his story. Koch and Masucci and the radiant Rosendahl are far more compelling screen presences.

Wandering point of view and meandering narrative aside, Donnersmarck has made a most impressive overview of troubled German history, from the Final Solution to the Fire Bombing of Dresden, touching on the comeuppance that came due when Germany started to seriously wrestle with that history and the mass murderers in their midst in the 1960s.

It’s just that, as I said earlier, that “This is getting good” moment comes far too late in the tale, after far too much dawdling through lush production design and sumptuous cinematography.

Like the film favored to win the Best Foreign Language Film Oscar, “Roma,” the writer-director has made a personal work of emotion and power, but with an indulgently slow, patience-shredding pace.