Movie Review: Payne Wastes a lot of Talent in the Process of “Downsizing”

Posted on December 20, 2017 by rogerinorlando 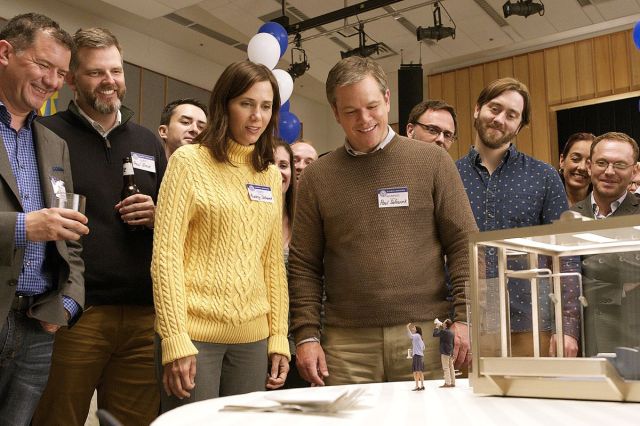 You think about Alexander Payne’s other films, comic satires, a lot during “Downsizing.” You remember the political parody “Election,” the hot-button abortion comedy “Citizen Ruth,” the wine snob pretensions of “Sideways” and the pleasures of “The Descendants,” “Nebraska” and “About Schmidt.”

Because “Downsizing,” a bleak, over-reaching mangled mess of a satire, is none of those. Still, the inclination is to give one of our greatest directors the benefit of the doubt is strong.

It’s a sci-fi comedy about a future in which the logical solution to planet over-population, pollution and over-consumption of limited resources is to “get small.” Literally.

Payne’s getting at half the population, dimwits not “accepting” a coming climate crisis, at do-gooders who embrace the abstract “Save Humanity” vs. those smart enough to deal with hunger, pain and loneliness they see right in front of them. He’s ripping the “laziness” of affluence, and the indolence that settles in when working class folks are within reach of that big brass ring. And he’s puncturing any notion of a Utopian future. Class divisions and the working poor will always be “necessary” to pop up the idle rich.

And if all that sounds like an overreach, it is. Payne’s solution is to waste famous character players in bit parts in a tedious, detailed “history” of Norway’s discovery of this process (Do tiny Norwegians still kill whales?), the lengthy development of shrinkage from lab rats to people, the recruitment/timeshare style sales pitches to lure people to spend their modest savings, which multiply in scale so that they can “live like kings” once they’re five inches tall.

Matt Damon and Kristen Wiig are Paul and Audrey, a struggling couple we follow for years, working at frustrating jobs with too little pay — Paul, looking after his long-suffering (fibromyalgia) mom who wonders how this new discovery will make anybody better off.

Meeting his high school pal who got small (Jason Sudeikis) convinces Paul, and eventually Audrey, that there’s a better way. They’re not “saving the planet.” “You’re saving yourself.”

But Paul’s angst at a life of lost opportunities is greater than Audrey’s. She bails out on him, leaving her divorced husband in the enclosed, environmentally-controlled community of smalls called Leisure Town, to date dull women and endure the put-downs of his brusque but conciliating party animal/entrepreneur neighbor, Dason, played with his usual sadistically funny flair by Christoph Waltz.

Hong Chau plays an almost stereotyped Vietnamese refugee and village activist whose sing-songy bark “You stupid!” makes him re-assess his priorities.  Activists at that level worry about the small picture, not the big one. Her direct acts of kindness and her perspective dominate the second half of the movie. Her pidgin English is borderline racist.

Rolf Lassgard of “A Man Called Ove” plays the soulful Norwegian who invents this process and begins the “Downsizing” movement.

While I’m at it, I’ll mention that Sudeikis has virtually nothing to play, that Joaquin Almeida has a single scene and single line, as a scientist introducing the Norwegians, that James Van Der Beek plays a single-scene snooty anesthesiologist who went to school with Paul, that Margo Martindale has a single scene as a small reassuring Paul and Audrey that they’re doing the right thing, and that the great German actor Udo Kier plays Dason’s sad-eyed ship’s captain sidekick.

The waste here isn’t limited to the actors. Payne squanders the first hour of the movie with processes– showing the “science,” the vast team of salespeople (Neil Patrick Harris, Laura Dern) and medical technicians it takes to operate this vast new enterprise. We don’t just see Paul undergoing the shaving, enema, etc. to prepare for being small, we see a dozen extras go through it, too. It’s infuriating.

Every scene — the pointed and the pointless — goes on too long. No character is wholly motivated or explained, even the “Me love you LOooong time” stereotype Hong Chau has to play. No actor, save for the scenery-chewing Austrian Waltz, makes much of an impression.

After “Promised Land” and “Suburbicon,” this is the last movie Damon should have signed on for. Satire, even environmentally-oriented satire, hasn’t been kind to him.

But Payne at least has earned the benefit of the doubt, and the freedom to turn out a dud. Let’s hope he’s figured that out for himself.

MPAA Rating: R for language including sexual references, some graphic nudity and drug use.