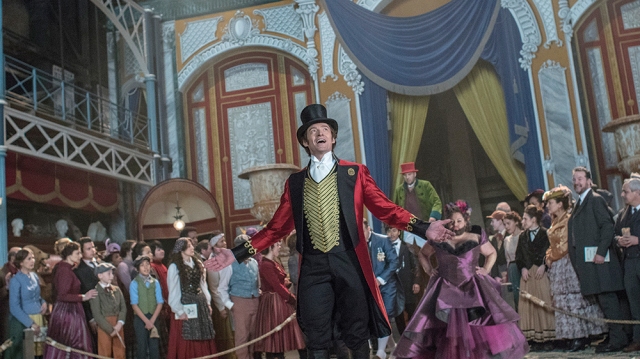 We used to call them “triple threats,” these wonders who walked among us. They could sing, dance and act, and do each equally well.

Gene and Debbie are gone, Shirley and Rita pretty much done with hoofing it. But Hugh Jackman, that “Boy from Oz,” is still belting, hoofing and emoting, a triple talent treat whose chief screen threat has come via a set of knives for knuckles.

If you’ve ever wondered why Jackman moved so fluidly as The Wolverine, what all that physical grace under the sideburns was about, that was your explanation.

“The Greatest Showman” is a Jackman screen showcase like no other. A fellow could get lost in the pageant of “Les Miserables,” take a back seat to the action in “Wolverine.” Not when he’s got the title role in a new musical, written for him and for the screen.

It’s about that first Hero of Hype, Master of Ballyhoo and High Priest of Publicity, P.T. Barnum. And for Jackman, no mere “Barnum” adaptation would do. This musical co-written by Bill Condon, who adapted “Dreamgirls,” and Jenny Bicks, who wrote for “Sex and the City” and “The Big C,” is more up to the minute in its themes, more up to the second in its “American Idol” era anthems.

If Jackman parlayed one last turn as “Logan” for Fox to get this made, more power to him. It’s not a great film, but musicals are all about big dreams, your grasp exceeding your reach, show-stoppers and foot-stompers. This is all that. I’ll bet Barnum himself would have approved.

“Showman” follows Barnum, a shoe-repairman’s son who dares to love above his station, and eventually marry that first love (Michelle Williams). But he doesn’t really find his niche until he spies his first “extraordinary” person, a “star” for his Manhattan “Museum” of “oddities.”

Meeting the dwarf he renames (and uniforms) as “General Tom Thumb” (Sam Humphrey) is a revelation.

“They don’t know it yet,” Barnum says of the paying public, “but they are gonna love you.”

It’s a pitch he repeats to one and all, to the “Dog Boy,” the Siamese Twins and the Bearded Lady (Keala Settle, soulful as the heart of the piece). And it’s irresistible to the people he tells “They’re already staring at you. Why not get paid for it?” and to the paying public.

As he recruits his menagerie, hypes and becomes famous for what a critic of the day dismissed as “a circus of humbug,” Barnum, his wife and his new “family” of performers sing about “A Million Dreams,” and a visit and revisit their anthem of defiance and acceptance — “This is Me.”

The tunes are from Justin Paul and Benji Pasek of “La La Land,” and lean a tad too heavily on the “anthem” thing, though I found “This is Me” thrilling and everything else a pleasant time-passer, much the way “City of Stars” stood out alone from the “La La Land” lullabies.

We watch the showman’s meteoric rise — entertaining Queen Victoria because “If you want to impress society, might as well start at the top!” — and fictional prescribed fall. The script soft-sells the “freak show” element, but faces head-on Barnum’s arms-length attachment to this “family” as he sought fame in polite society via the “legitimate” theater, partnering with the rich, semi-successful “legitimate” producer Carlyle (Zac Efron).

“I can’t just run away and join the circus!”

“Why not? “You clearly have a flair for show business.”

“I just invented it.”

The real Barnum got his start with “The Oldest Woman in the World” (she wasn’t) and lived long enough to have a notable career in politics. And that’s where the film’s story, of tolerance and acceptance ahead of its time, is on firm ground — fictionalized or not.

“A human soul, ‘that God has created and Christ died for,’ is not to be trifled with,” the real Phineas Taylor Barnum said. “It may tenant the body of a Chinaman, a Turk, an Arab or a Hottentot – it is still an immortal spirit.”

That statement’s as liberal and tolerant as any made by an American in public life in the late 19th century. It doesn’t matter that the movie ends before this corner of his extraordinary life is explored, that ethos — modern as it seems in the movie (most critics didn’t bother reading up on him), lends a little truth to all the “humbug.”

Art director and digital compositor turned first-time director Michael Gracey is in over his head here (Did being Australian get him the gig?). His picture lumbers along, with a very predictable love story (an inter-racial romance between Carlyle and a trapeze artist played by the singer Zendaya) and even more predictable is the “Great Man’s Downfall” in the form of an all-consuming tour by “the Swedish Nightingale,” Jenny Lind (Rebecca Ferguson).

But Gracey keeps the camera moving, whirling through the cast and the dance numbers, turning several into amusing, athletic “seduction” scenes — Barnum enchanting his wife, Barnum luring Carlyle into the business (a bar-top stomp), Carlyle reaching out for the tiny aerialist, Anne (Zendaya).

It’s not a brand-name musical, not newfangled and hip-hop based and politically edgy like “Hamilton.” But “The Greatest Showman” is, like the singing, dancing, versatile actor who stars in it, larger than life. And if this is the only screen musical we can get out of the last of his peak performing years, it’ll do. Hugh Jackman is too much the showman to promise any less.

MPAA Rating: PG for thematic elements including a brawl