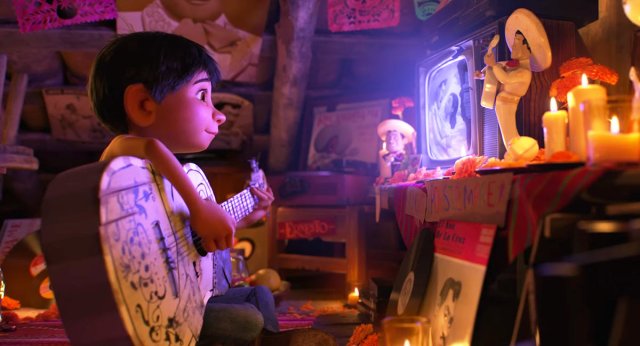 A Mexican boy needs the help of his ancestors to realize his dream of becoming a famous mariachi in “Coco,” an enchanting musical and the most charming Pixar movie in years.

And how does a Mexican lad confer with, debate and persuade his dead relatives to lift the family’s edict that no Rivera can ever be a singer? By visiting the colorful Land of the Dead on “El Dia de los Muertos,” the fall celebration called “The Day of the Dead.”

“Seize your moment! Reach for that dream, grab it right and make it your own!”

But “a Rivera is a shoemaker, through and through,” his big extended family reminds him. NO singing. Somebody in the past was a no-good musician who abandoned his wife and daughter. They’re not having any mariachis in their clan.

There’s a big singing contest in the Santa Cecilia town square. Miguel knows, in his heart, he could win it. If only he can get his hands on a guitar, master playing it and sneak away from the family to enter it.

The contest is on the Day of the Dead, and it is while Miguel is in the cemetery, paying his respects to the remembered dead that he spies an instrument that could change his life. Except that it’s in the locked crypt of the town’s most famous expat, the great Ernesto himself.

And stealing it transports him into the world of the dead, who are lining up to visit the living who remember them on this festival day. Miguel must meet Ernesto, fend off his own dead relatives (who KNOW why the family cursed musicians forever and ever) and negotiate a return to the land of the living in time for the Big Show.

Benjamin Bratt does a Latin Lover purr, and croons a tune or two as the great Ernesto, a silky smooth romancer from the Golden Age of mariachi. Gael Garcia Bernal also sings, as Hector, a desperate, long-dead corpse who must wangle his way back to visit the living so that he’s not forgotten forever.

The songs, by a rotating team of writers, are lilting and fun, especially a tune called “Un Poco Loco” that Miguel (Gonzalez is a marvelous child singer) and Hector perform, on the fly, to win an audience with Ernesto.

Ernesto’s theme song long ago was “Remember Me,” a lightly haunting love song that conveys the movie’s message. The dead are never truly gone so long as some one remembers them.

The colors are as vibrant as you’d expect, considering the subject matter. It’s a Pixar movie treatment of a subject the engaging “Book of Life” used as a setting a few years back, with the standard “Follow your dreams” Pixar messaging.

The afterlife is peopled by skeletons and run like a busy border crossing, a clever touch with a little political edge to it. And the jokes, respectful of the culture the film embraces, rely on the average viewer’s familiarity with all-things-Mexican to come off.

A skeleton sneezes at Miguel’s stray dog (Dante, a Mexican hairless), who has followed him into the underworld.

“I am TERRIBLY allergic.”

“But Dante doesn’t have any hair!”

The whole enterprise is amusing, warm and embracing, so much so that English words fall short of perfectly summing up this enchanting, charming film.

Only a Spanish word will do. “Encantadora.”