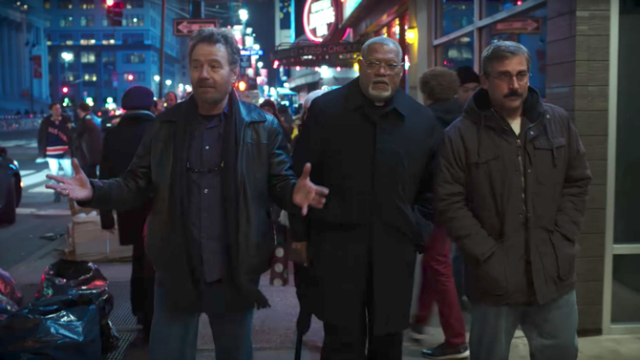 “Last Flag Flying” is Richard Linklater’s homage to “The Last Detail,” a dark service comedy that was an early screen triumph for Jack Nicholson.

But Linklater’s film, about old comrades-in-arms traveling to bury the just killed-in-action son of one of their number, is a sentimental slog of a movie, more “Bucket List” than “Last Detail.” It ambles along, with a full hour of preliminaries, and flies or flops on the endless, over-eager mugging of Bryan Cranston.

It’s fitting that the “Breaking Bad” star plays a retired Marine running his own bar in Norfolk, Virginia, and not just because Norfolk is a military town. It’s damned closed to Smithfield, and home to the sort of ham Cranston morphs into for this.

Sal is a true hale-fellow well-met barkeep, a big drinker and bigger talker. But he doesn’t recognize the quiet, sad-faced man who parks himself at the far end of “Sal’s Bar & Grill.”

It’s a long-discarded nickname. They served in Vietnam together, and Doc (Steve Carell) was a Navy Corpsman (medic) with Sal’s Marine platoon.

“I saved his LIFE once!” Sal brags to a rummy.

“You never saved my life.”

Whatever happened “over there” was long ago (the film is set in 2003). Doc, whose real name is Larry, spent time in military prison afterwards. Sal was a lifer who has run this bar for years and years. They share a past and a big secret.

Whatever that is, it’s compelling enough to make Sal take Doc on a road trip, no questions asked. To church. Sal’s “What’d you get me into, Doc?” is still hanging in the air when he realizes who the compelling, popular village preacher is. Rev. Mueller (Laurence Fishburne) was once “Mueller the Mauler,” a bonafide hell-raiser (with Sal) back when he was in the Corps.

He’s a pious, compassionate man. And he’s the other companion Doc wants for his real purpose for showing up. His son, a Marine, has just been killed in Iraq, “a hero.” And he wants these two guys he hasn’t seen in 30 years to accompany him as he attends his son’s funeral on the hallowed ground of Arlington.

If you know your geography, that’s a very short trip. And if you’re going to build days of feuding, bonding, guilting and grieving into your movie, things have to get complicated. You need a much longer journey if you’re going to convince the preacher to take up swearing again, give Sal time to sober up enough to think about someone else  for the first time in his life and Larry time to grieve, and maybe have a strained laugh or three with guys who treated him like the gullible kid he was, back in the day.

Fishburne is perfectly cast as the stern, sensitive true believer in the room.

“We pay for what we say, Salvatore,” he lectures.

Carell is largely silent for long stretches, his character stumbling into the background of a movie that’s supposed to be his quest.

Because we need all this screen time for Cranston’s blowhard to blow. Hard.

“The worst thing that can happen to anybody just dropped on you” is as soft as he gets with Larry. “You’re just going to have to deal with it.”

J. Quinton Johnson plays a colorlessly written comrade of the dead Marine. Yul Vazquez shines as a “He’s a hero and I’m sticking with that” Marine Lieutenant Col. who tries to convince Larry his son’s death meant something, and that he should stick to the Corps’ Bush Era protocols.

Linklater’s film finds its truth and its virtues in the same places as the equally-flawed “Thank You for Your Service”  — in the rituals of grief, honor and mourning within the service. The Dover Air Force Base hangar where caskets arrive, out of the public eye (a “control the message” bit of Bush/Cheney censorship), is empty save for a few mourners, coffee and a box of Krispy Kremes.

But the honored dead earn formal, compelling escort by the Corps and anybody else who served, from an impromptu gathering of Marine pallbearers to the Amtrak baggage handler who won’t leave a casket alone during transport.

Linklater is still able to move us, even after he’s bored us half out of the movie with his long set-up, even after Cranston has sucked all the oxygen out of the picture with his hernia-inducing twinkle, even after we’ve given up on “Last Flag Flying” as too damned cute for its own good.

MPAA Rating: R for language throughout including some sexual references