With “Suburbicon,” George Clooney at long last achieves one of his bucket-list goals as director, making a satirical misfire every bit as tone-deaf as the worst works of his movie-making mentors, the Coen Brothers.

It’s a darkly humorous murder farce set against the integration of a lily-white Connecticut suburb in 1959. And while there’s value in recalling that northeasterners declare, more than once, “We’re NOT Mississippi,” even as they harass and riot to chase out the first black family to move to the planned community Suburbicon, that the town’s REAL villains are the white Episcopalian monsters carrying out a murderous insurance scam next door, it’s not all that dark and not farcically funny, not in the least. 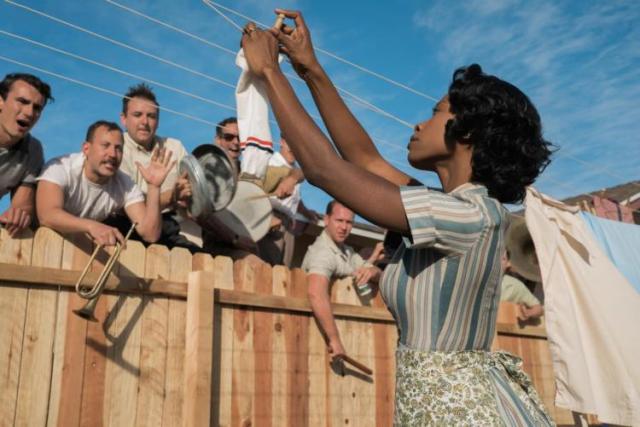 Matt Damon is upstanding citizen Gardner Lodge, a buttoned-down executive vice president at a local firm who goes home each night to suburban bliss. Except a Negro family (Karimah Westbrook, Leith M. Burke, Tony Espinosa) has moved in next door.

Not that this stands out as a “problem” to him or his wife Rose (Julianne Moore), and their son Nicky (Noah Jupe) just thinks that he’s got a new friend to play with.

Gardner has bigger problems, as in these two thugs who invade their house, menace them and kill Rose.

The film’s cleverest scenes are the starchy way Gardner copes with this loss, the emotionally-stunted “1950s” people in his office trying to comfort him.

“I’m glad we had this talk,” after nobody has talked. At all.

But little Nicky sees something else in Dad’s closed-off grief, in the haste with which Mom’s twin sister Margaret (Moore again) moves in because “Nicky needs a mother,” in the police line-up where Dad and Aunt Margaret refuse to ID the killers (Glenn Fleshler, Alex Hassell).

As the neighbors riot about the black family next door (NOBODY sticks up for them), Nicky sees the real “threat” right under his own roof. The arrival of an oily insurance claims investigator (Oscar Isaac) only confirms his suspicion.

“It all boils down to one word — ‘coincidence.’ Happens a lot in operas,” but not in real life, not in life insurance claims.

Clooney, who shares screenwriting credit with the Coens and his usual partner Grant Heslov, gives the picture no urgency, takes on the Coens’ mocking-contemptuous tone toward the characters, with their quaint 1950s sexual and emotional repression, and loses himself in their mania for finding laughs in the production design. The ugly brown appliances, dopey flashlight TV remote control, starchy 1950s clothes and dated “racism” on the TV news — hilarious.

Damon has played this sort of amoral character before, but he can’t find the funny in Gardner, in his empty reassurances to his son that he’s “an adult” who “understands” things differently, reassurances that sound like threats.

Moore differentiates the two twins and gives us something to latch onto (Margaret is a little gullible, impulsive and panic prone). But it’s not an amusingly written character.

Clooney has no more idea what to do with African American characters than those Minnesota Coens. They’re just icons — plot devices, barely sketched-in — closely modeled on couples who endured this sort of abuse in the “tolerant” north during the Civil Rights era.

And while the message — “The REAL threat looks JUST LIKE YOU” — may sting on paper, in the movie it’s just lost. The abrupt escalation from social shunning to rioting against black neighbors without putting them under suspicion for the murder is more inept than you figure the director of “Good Night, and Good Luck” should be.

In trying to master his Coens impersonation, Clooney has done them proud. He’s made “The Hudsucker Miscarriage.”

MPAA Rating: R for violence, language and some sexuality