Posted on September 29, 2017 by rogerinorlando 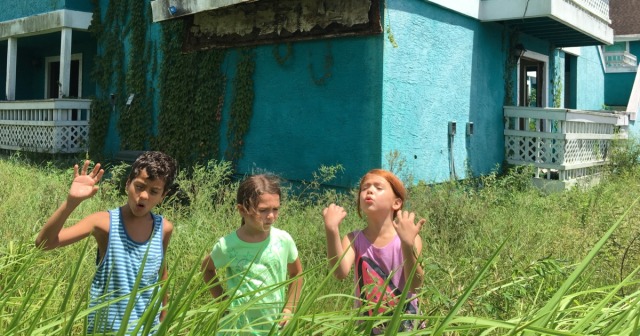 There is an Orlando that exists in the very shadow of the theme parks that make the city America’s Vacationland.

It’s the Orlando of the young service-sector poor, transients — many with children. They wait on the tourists, clean their toilets. And those are the lucky ones. A few too many bad choices about drugs, tattoos and appearance and even those jobs are hard to get. Preying on tourists becomes their last option.

Most can’t buy a home, and when they do, they have to abandon it. Childcare is left to chance, unless the state gets wind of it.

That’s the gritty side of “The City Beautiful” that movies have only hinted at — the fruit stands, “discount” ticket kiosks, souvenir shops, C-list attractions and seedy fifth-hand motels of “Monster” and “99 Homes.”

This Orlando — suburban, run-down Kissimmee to be precise — is where the adorable, reckless foul-mouthed imps of “The Florida Project” raise themselves. Writer-director Sean Baker has followed his riotously raw filmed-on-a-cellphone “Tangerine” with a poem to childhood mischief, imagination and acquired coping skills set within sight of Every Child’s Fantasy Vacation — Disney World.

Moonee, played with an unfiltered exuberance by discovery Brooklynn Prince, is the leader of the pack. If there’s a spitting contest to be staged, a profane shout-off with adults to be engaged, a utility room at the Futureland Inn where she and her running mates (Christopher Rivera, Aiden Malik) are never supposed to enter, she’s the instigator.

Broken families and broke families reside there, scraping together the $38 a night to sleep, cook, smoke and socialize by the pool of this dead-end of the tourist corridor, where garish purple paint long ago took the place of actual maintenance.

Not that Bobby, the manager, wants it that way. It’s a terrible job — dealing with brawls in the parking lot, hookers setting up shop, residents who can’t pay their bills and won’t follow the rules. But he does it. And if it “takes a village” to raise Moonee’s pack of free-range six year-olds, they could do worse than Bobby, given sympathy and forbearance by Willem Dafoe, in one of his sweetest performances ever.

Whatever minimal supervision his residents — who must skirt “residency” rules, with his help — can’t be bothered to give their kids, Bobby is there, a last line of defense against accidents, eviction and the sorts of predators who find their way anywhere children are gathered in great numbers.

Bobby is the kids’ “Catcher in the Rye.”

The parents range from the competent working poor, mothers and grandmothers, to Halley, Moonee’s mom. And meeting her, you see where Moonee got her mouth and shudder for her future. Bria Vinaite’s not just playing a strip-club trash stereotype, she is a loving incompetent, an impulsive child herself with just enough native cunning to keep them going, week to week.

It’s Moonee and her gang that the movie tracks, from farm fields with cows to the ice cream stand where they hustle free treats, burping contests, finding the magic of humming into a fan, flipping off tourists who take off for those annoying helicopter flights over Orlando’s Big Three theme parks.

It’s Moonee who shows newcomer Jancey (Valeria Cotto) the lay of the land, her new playground.

“This is where we get free ice cream…The man who lives in here gets arrested a lot…Nobody uses the elevator ’cause it smells like pee.”

“We’re just playin’!” A second query from any adult gets a “You’re not the boss of me!” And worse.

Halley, covered in tattoos and piercings, cursing her bad “luck” for not being able to hold a strip club job or get work in “the parks,” keeps a foul temper barely in check with weed and a “Just chill” comeback at every complaint Bobby brings to her door.

Baker peoples this world with hotheads and hangers-on, elderly nude sunbathers and traveling perverts. But he never loses track of those kids, watching them misbehave and take stupid risks, witnessing, as they do, their parents’ careless, sometimes violent behavior. “The Florida Project” maintains a harrowing sense of suspense about those moppets. What, among the smorgasbord of accidents waiting to happen, will be the one that tips them off the razor’s edge they and their parents live on?

Baker documents the nuts-and-bolts of this level of poverty in this part of the world, filling in where “Monster” and the housing crisis drama “99 Homes” merely introduced us to it. That alone makes “The Florida Project” one of the best pictures of 2017.

But rarely has a movie gone as deep into the magical resiliency and adaptability of childhood. As cute as these kids are, as resourceful as any six year-old not in school could be, you fear for them — not just for their risky present, but their cycle-of-poverty future.

Every child’s fantasy might be to live at Disney World. Every parent’s nightmare would be to live near it, without the resources, job and prospects to ever take that child to “The Happiest Place on Earth.” “The Projects,” be they in Chicago, Houston or Orlando, are no place for dreamers.

Roger Moore talks with the filmmakers about Greater Orlando, “Cinderella’s Slums” and the inspiration for “The Florida Project” for Orlando Magazine — linked here.