Posted on August 9, 2017 by rogerinorlando

The dire state of animation screenwriting, made plain by a summer of “Cars 3,” “Despicable Me 3” and worse (“The Emoji Movie”) is pounded into stone by “The Nut Job 2: Nutty By Nature.”

Even the year’s funniest cartoons — “Boss Baby” and “Captain Underpants: The First Epic Movie” — got by on chuckles and giggles, barely a belly laugh between them.

Sony Animation may smirk over selling “The Emoji Movie” to a few million suckers over the howls of warning from critics and social-media trashings from friends and family. But the days of “If we animate it, they will come” are fast ending for the cynical and the skin-flinty in Hollywood’s corridors of power. If they don’t start spending on re-writes, the end is nigh.

“Nut Job” had some Will Arnett sass, a touch of fast-paced slapstick and a cute hook — endangered park animals knock over a nut shop — a few years back. It wasn’t a laugh riot, but there were giggles enough to get by.

Are they selling the sequel with “Well, at least it’s not ‘The Emoji Movie?” Because the limp loonyness on display here has barely a giggle, much less a laugh.

Surly the hustler-squirrel (Arnett) presides over a never-ending feast at the nut emporium he and his fellow park dwellers have made their home.

His squirrel gal-pal Andie (Katherine Heigl) may be all about the aphorisms.

“Easy doesn’t build character…There are no shortcuts in life, Surly.”

But that falls on deaf ears, even after the nut shop blows up and the park they all used to call home falls under the gaze of a rapacious, crooked mayor (“SNL’s” Bobby Moynihan), Surly is still looking for an angle, a hustle. 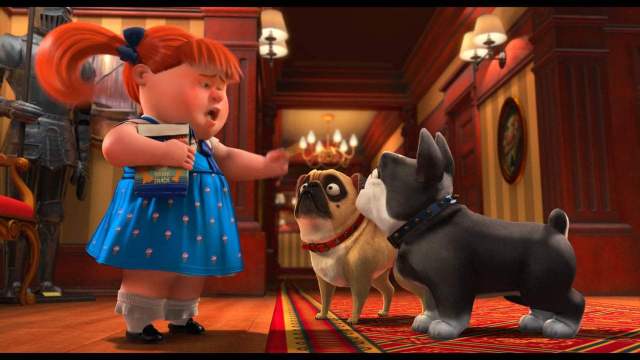 There’s GOT to be a way to get the pug Precious (Maya Rudolph) into the mayor’s house, maybe by flirting with his obnoxious daughter’s Boston Terrier, Frankie (Bobby Cannavale).

The picture meanders through a 1960 cityscape, with Surly not managing a single moment of funny business and Arnett and Rudolph having nothing funny to say.

The one gag that works is probably a little racist, or at least racially touchy. Jackie Chan voices the lead mouse in a sea of martial artist mice who beat the purple out of Surly any time he ventures into Chinatown.

There’s novelty in hearing the voice of Scandinavian heavy Peter Stormare as an animal control officer — again, with nothing remotely funny to say or do.

Then again, maybe you bust a gut over the mayor’s license plate pun — “MBZLVR.”

The odd strained chuckle, here and there, isn’t enough to take the stench of “Emoji Movie” summer off “Nutty by Nature.” Maybe Surly is speaking for all of American animation when he delivers the one good line Arnett has in the script.

“Amazing how quickly rock bottom catches up to you.”

MPAA Rating: PG (for action and some rude humor)

Credits:Directed by, script by . An Open Road release.