Scores of documentaries and features films touch on the Iraq War. And out of all them, maybe one moving scene– the funeral convoy of the “American Sniper.”

But show us a Marine and her dog, and on come the waterworks.

“Megan Leavey” is based on the true story of an aimless, working class screw-up who finally finds purpose and the ability to “bond” when the Corps assigns her to a war dog.

Megan, ably played by the diminutive Kate Mara, can’t hold a job, not one that requires interpersonal skills.

She drinks too much, disapproves of her feckless mom (Edie Falco) and the man mom cheated with (Will Patton).

“You don’t really connect with people,” Megan is told. And we can believe it.

Maybe shooting people is the answer. So she joins the Marines.

In her prim, undersized uniform, Mara endures the “You look like a little toy soldier” jabs as if she’s earned them. And the Corps doesn’t alter her ability to drink too much and screw up too often.

But it’s the punishment that changes, cleaning out dog cages for those training with war dogs, the soldiers and their bomb-sniffing companions who are “in front of the ‘front lines,'” that gives Leavey purpose. She’s no good with people. Maybe a German shepherd is the answer.

The head of that unit, the “Gunny” in charge, is played by the actor/composer/singer Common in his best big screen role in years. He’s not interested in screw-ups.

He gives her the meanest dog in the lot, and perhaps the smartest, Rex. And in between barked commands, he gives this overmatched pixie the advice she needs to make this new relationship work.

“I can’t teach you to bond. Listen to him. Everything you feel goes down the leash.”

And as Leavey talks to the dog, they connect and get sent to Iraq.

Tom Felton (Draco Malfoy from the “Harry Potter” movies) ably portrays a veteran war dog handler and Ramon Rodriguez is the fellow handler who takes a romantic interest in Leavey.

The bomb-searching and combat scenes are handled with skill, though the “big” one has lapses in logic that might take you out of the movie. 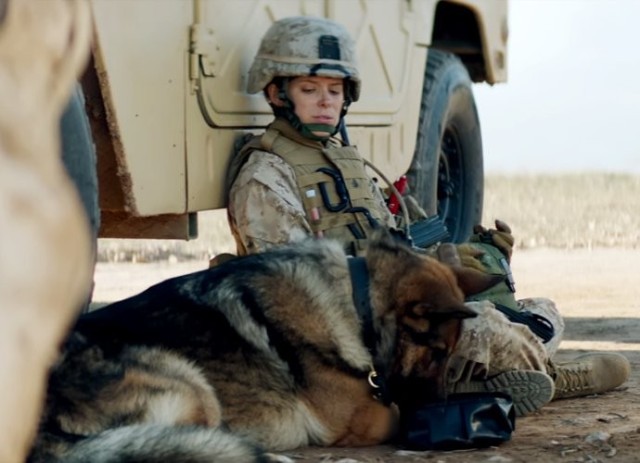 And for all its cinema verite realism, there are moments when Mara, like her sister Rooney, a child of great wealth and privilege, needed another take or two to convince us that she’s working class. Little lady’s never picked up on Old Milwaukee can in her life.

Similarly, Bradley Whitford is sympathetic, but lacks the works-with-his-hands earthiness of a working class dad so proud of his daughter’s service.

But Mara delivers the movie’s emotional punches like a prize-fighter, utterly selling us on the notion that this cold, remote and guarded member of the working class walking wounded has found her true love in the one guy who needs her, sticks with her and saves her life.

Those scenes make “Megan Leavey” a story worth telling and a movie worth relishing, a weeper that earns its tears.