“Lowriders,” the last sleeper hit of the spring, is an engaging if over-familiar Latino melodrama about fathers and sons, embracing one’s culture even as you stretch it and love triangles.

Corny? Si. But set as it is against the East LA locus of Latino car culture, it is also a delightful appreciation of and history primer for anybody not familiar with where those shiny, bouncy custom cars one sees from sea to shining sea came from.

The great Demian Bichir — of “A Better Life,” and utterly wasted in “Alien: Covenant” — is the patriarch, Miguel. He owns a garage in East Los Angeles, and like his father before him, he’s a car customizer, laying on adding the flash, wiring in effects, loading the hydraulics and layering on “30 coats” to create lowriders with his Coasters car club.

Miguel is a widower who remarried Gloria (Eva Longoria), a proud man fighting for his sobriety and wrestling with guilt.

Because Miguel has two sons. Danny (Gabriel Chavarria) is a talented artist. But he works in graffiti, which could land him in jail. And Miguel cannot have that. He’s already lost one son (Theo Rossi) to the dark side. Francisco has taken on the nickname “Ghost,” because that’s what he is to his dad.

“When they’re your kids, you don’t stop trying,” Miguel’s wife counsels. But that may be too little too late. Ghost wants to have an impact on his baby brother’s life. That’s the first “love triangle” of the story. Who will win Danny’s loyalty? 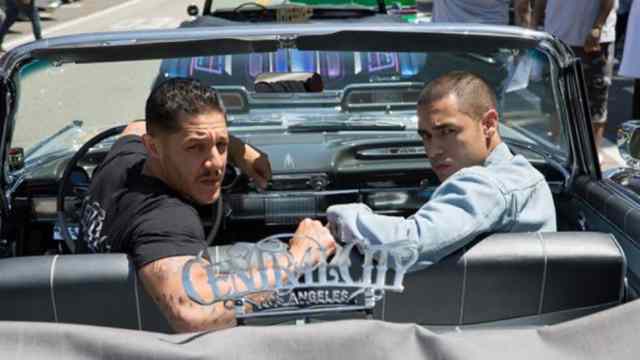 But being talented, Danny draws the attention of the hip Anglo photographer (Melissa Benoist of “Glee”). She can interpret his art (through white entitled eyes), hook him up with the LA art scene, help him sell out.

The various tug-of-wars play out in the most predictable ways in this melodrama, a term that sums up the conventions of a conventional genre story, with all the shoehorned-in relationship issues, gang fight and cop interventions the picture can manage. There’s as sure to be a kid named Chuey (Tony Revolori) caught in the middle of it all as there is a “Big Chevy” (pronounced “Tchev-ee”) car show where it all can reach a climax.

Bichir is wonderful, young Chavarria is solid in what could be a break-out role and Rossi (“Sons of Anarchy”) gives nice shading to the shady “Ghost,” a gangster with grievances, a son with a heart.

And as predictable as all that is, the film has utility and charm, letting Miguel explain the connections of lowriders to pre-automotive Latin American culture, letting Danny learn that history — the racial profiling that puts laws on the books about how low cars could sit on the road (thus, the retrofitting of aircraft hydraulics to “lift” the cars when the cops drove by).

So for all the corn, “Lowriders” can be appreciated for its rolling stock and serving a criminally under-served audience — Who do you think makes the “Fast and Furious” movies monster hits? — a film with fine performances and teachable moments amidst all the melodrama.