Movie Review: Is there a mensch behind the macher in Richard Gere’s “Norman”? 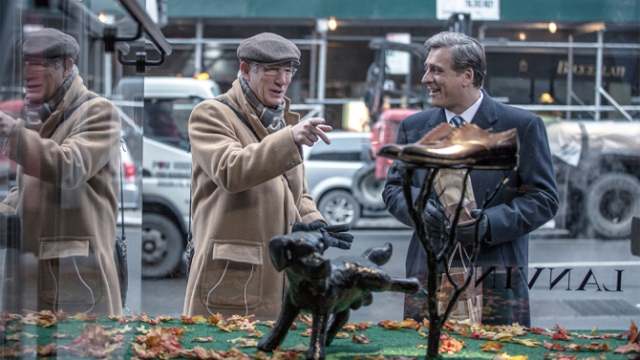 There are a lot of old standbys in New York “businessman” and “consultant” Norman Oppenheimer’s vocabulary.
“How can I help you?” he’ll plead, when what he’s really worried about is how you’ll help him.

He name-drops, shamelessly, with great exaggeration. “Very close friend,” he says of every mogul, tycoon, politico or shaker and mover he’s ever locked eyes with. “I’d be happy to put the two of you together.”

We never see him at home, never catch him in “the office.” Nor does anyone else. He’s got his earbuds in, his camel-hair coat covering a not-quite-stylish suit, hat and scarf. And he’s schlepping, kibbitzing, never-quite kvetching.

“Norman: The Moderate Rise and Tragic Fall of a New York Fixer” gives us Richard Gere as we’ve never seen him — channeling Woody Allen, juggling lies and agendas like a latter day “Broadway Danny Rose,” more tragic than funny. He’s a fast-talking hustler decades past the age when he should be hustling like this. Norman is a glorious failure, a Willy Loman of the Israeli/New York Jewish power elite, always outside, “a drowning man trying to wave down an ocean liner.”

This schnook has his spiel, and he’s nothing if not persistent. The aide to a New York mogul (Dan Stevens of “Downton Abbey”), a shaker-and-mover (Josh Charles), an influential rabbi (Steve Buscemi) or his own well-connected but reluctant nephew-lawyer (Michael Sheen), he buttonholes one and all.

He picks his marks and stalks them. Every stalking that leads to a brief street-corner conversation is a “meeting,” every not-quite-chance contact “an old and dear friend,” every promise a not-nailed-down bluff, every lie with just enough truth in it to keep his nose from growing.

Yeah, he’ll remind you of Allen, and a certain politician dominating the TV news these days.

In Joseph Cedar’s film, Norman’s quest is divided into acts — “Act One: A Foot in the Door,” “Act Two: The Right Horse.” We experience Norman’s arm-twisting not-quite-charm, his disarming way of approaching a stranger he’s researched with “Let me HELP you,” promising meetings with the right people about the right deals, all of which he says he can facilitate. But can he?

“The Right Horse” turns out to be Misha, an Israeli cabinet official (Lior Ashkenazi) whom Norman figures can get him in the door with a Wall Street tycoon (Harris Yulin) whose assistant (Dan Stevens) is downright abusive in his dismissals. Norman spies his mark at an Israeli-American conference, works his magic, finds his angle and does the man a little kindness.

Years later, Mischa Eshel is prime minister, a swaggering idealist who big plans for saying “yes” to compromise and peace. And in a Washington receiving line in a reception for the new prime minister, Norman has his moment of vindication and his finest hour.

Nothing in writer-director Cedar’s Israeli filmography (“Footnote,” “Beaufort”) points to the art, craft and comical cunning of “The Moderate Rise.” Norman experiences a freeze-frame moment, embraced by the new prime minister in front of the press, members of Congress and every heavyweight New York Jew who ever brushed him off. His magnanimity, grabbing the big names that ignored him and making introductions to the PM, makes us see Norman as more a mensch (sweetheart of a human being) than a macher (fixer, facilitator). If just for a moment.

He is beyond being insulted, a little man who refuses to hold grudges. And if we haven’t before, we start to root for him. What does the prime minister want? To get his middling-student son into Harvard. What does Norman’s nephew want? The famous rabbi to marry him and his “converted” wife in the prestigious synagogue. What does the rabbi want? Millions to save his historic synagogue. What does the mogul want? Some bit of Israeli intervention in a deal he’s cooking up in Africa.

And so on. Norman, we see, is on the cusp of getting everybody what they want. If only they’d ALL return his calls when he needs them to.

Charlotte Gainsbourg plays an Israeli Embassy employee fascinated by Norman’s methods and “connections.” Hank Azaria shows up in the third act as an even less successful version of Norman himself, a poorly-dressed hustler whose shtick Norman is too numbed to acknowledge as his very own.

Cedar turns his satirist’s eye on an Anti-Semite’s wet dream, a Jewish world where connections are made just by virtue of ethnicity, creed and commitment to Mother Israel. All that’s missing, and missed, from this Manhattan Moebius Strip Marketplace are its media mouthpieces — The New York Times, The New Yorker and B’Nai B’rith Broadcasting (NPR). Cedar still manages to comment on the clannish culture with a jaundiced eye, and endorse it as he does.

Cedar pities this wannabe as he zeroes in on his biggest failing. It’s that others won’t openly acknowledge needy Norman’s contribution, take his call and let him get the wheels to turn more smoothly.

It’s startling to see how Gere physically shrinks in this role. The confidence and dash and hint of ruthlessness that have been career trademarks vanish in this smallest of “little” men. Cedar cleverly stages Norman’s approach to the future prime minister in near silence, through a store window, with Gere pantomiming the (literal) arm-twisting charm and instant fake bonhomie that is Norman’s stock-in trade. He’s just brilliant.

Cedar has given Gere his own “House of Cards” to move into, where the game analogies spin out as chess and, most tellingly, dominoes. Norman needs them to fall just so, and if they do, he will be a man to be reckoned with.

But the genius of “Norman” is that we know, and he must suspect himself, that even if that happens, even if his intentions are honorable, he’ll still be as small as ever, kleyntshik even. Once a klutz, always a klutz.

MPAA Rating: R for some language