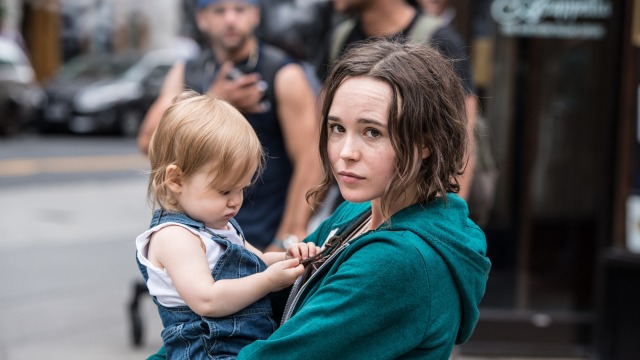 “Tallulah” is just the sort of movie Netflix should be making. No box office stars, an unconventional story, it’s a “film festival” movie — one with little chance of finding its niche in the theatrical marketplace.

But a tale with tiny Ellen Page as a homeless, impulse-purchase mom  written and directed by an “Orange is the New Black” veteran? Netflixable, for sure.

Page has the title role, a drifter whose drifting is powered by an ancient panel van. She and boyfriend Nico (Evan Jonigkeit) dumpster dive for meals and use “any means necessary” to gas it up for the next leg in their journey. Tallulah enjoys their unbridled van sex and dreams of traveling to India.

Nico? He’d like something more stable. He’s in love. He wants a life together, with a future. That’s one thing Tallulah can’t abide.

But when Nico bails, where does “Lu”, as she calls herself, go? She hunts down Nico’s embittered, abandoned mom (Allison Janney) in New York. Nico hasn’t been home in two years, her husband is waiting for her to sign the divorce papers, and she’s not buying into any hustle the perky urchin is trying.

Circumstances put Lu in a swank hotel, where the room-service leftovers are best, and into the clutches of Bad Mom (Tammy Blanchard), a drunken, aging trophy wife in the mood for a fling. But she needs a babysitter, and without giving Lu her name or number or any real instructions, she leaves her naked toddler in the care of a stranger.

Lu, whose unsuitability for this role is obvious the first time the diminutive Page picks up little Maddie, bonds with the baby in a single evening. She decides to keep it, and she decides Nico’s mom would be the perfect helper/advisor in this scheme. All she has to do is pass the child off as Nico’s.

“Were you raised by WOLVES?”

“What’s WRONG with you?”

We’ve been hard-wired by storytelling tradition to look for the character arc in a story, the “hero” and her quest. But writer-director Sian Heder brings elements of her TV work to this script. It’s not really Tallulah’s arc that we embrace. She is impulsive, damaged and immature at the beginning, and so she will be at the end.

It’s Margo (Janney) and the Bad Mom, a self-involved ditz who fails to convince us she sees her kidnapped baby as anything more than a lawsuit against the hotel, who make the hero’s journey here.

Heder gives every actress lots of close-ups, and that allows Page, in particular, to transcend what is more a “type” than a character. Lu is the sort of role she is drawn to — a bit of a loner, social misfit, off-the-grid.

Janney can change a scene with just a look in her eyes, and Blanchard (“Into the Woods,” “Money Ball,” “Blue Jasmine”) imparts pain and fear and longing in moments of drunken cunning (the way she “plays” the hotel staff).

The story is pure melodrama and more conventional than daring. But “Tallulah” makes a fine demonstration project to under-employed talent — in front of and behind the camera. Netflix has found its niche, and it need not include Adam Sandler.