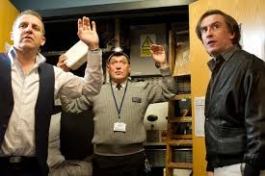 Steve Coogan may have copped Oscar nominations for writing and producing “Philomena,” a film that offers Judi Dench another shot at an acting Oscar and Coogan a chance to re-invent himself as an actor.

But the reason Coogan’s always needed reinventing  is his greatest creation, the self-absorbed, tactless, book-smart but dopey Alan Partridge. He can make all the movies he wants, and in Hollywood he’s starred in “Hamlet 2” and stolen bits of “Tropic Thunder”, “The Other Guys” and the “Night at the Museum” movies. In Britain, he’ll always be that touchy, puffy-haired boob with the catch-phrase – “A-haaa” — born in his ABBA fixation, a toxic dunce they’ve been watching fail his way off TV and into local radio in 20 years of Alan Partridge TV series and specials.

Now “Alan Partridge”, the movie, a hit in Britain, earns a limited release in the U.S. It’s a hilarious 90 minute State of the Partridge project, and you don’t need to have seen the series and specials to get the scores of jokes. But they sting even more if you have.

Partridge, now 55, is clumsily hosting a show on North Norfolk Digital’s Radio Norwich. Quite the comedown from his days hosting a generic and inept chat show on the BBC.

The big running gag here is his “Sunset Boulevard” vanity, the testy insistence that he used to be big, even if he just does local radio and voice overs for butcher shop commercials.

But Radio Norwich has been bought out by a new conglomerate, and when the layoffs come, self-preservation king Alan hurls his colleague (Colm Meaney) under the bus. Pat, the night DJ, doesn’t realize this when he seizes the station and takes the staff hostage at an office party. His old mate Alan is the one he trusts to be the go-between with the cops.

So the cowardly Partridge has to cozy up to the Irishman with a gun, try to do the police’s bidding and, while he’s at it, curry favor with the new owners and turn this life-or-death situation into a kick in the rear for his career.

The situation, borrowed from movies like “Airheads,” is nothing special. But there’s warmth in Coogan’s scenes with Meaney, a couple of 50somethings for whom life is just different shades of disappointment.

What’s hilarious here are the scads of what could have been throw-away lines, every one a killer. Alan on guns — “I’ve never fired one in anger. Or at a cat.”

On cops rushing him to get to the point of an anecdote — “Why? Do you have another siege to get to?”

What’s it like, trapped with the others inside the station?

“Scary, stressful. Lots of shouting. A bit like being married again.”

Every record intro on the radio is a keeper — “That was soft rock cocaine enthusiasts Fleetwood Mac.” And “What a voice. You can keep Jesus. As far as I’m concerned, Neil Diamond will ALWAYS be King of the Jews.”

Fans of the TV series will spy Alan’s long-suffering assistant and would-be conscience, Lynn (Felicity Montagu) and the Geordie-accented buffoon Michael (Simon Greenall) who has long been Alan’s biggest fan.

It’s a comedy of sight gags, zingers and awkward pauses — lots of those. Sentimental at times, yes. But funny. Always.

Coogan can gripe about freeing himself of Partridge, and he even made the period piece “Tristram Shandy” into a “Steve Coogan runs from Alan Partridge” comedy. It’s great to see him embracing his inner oaf, this venal, petty middle aged media flop.

He has taken the advice his Alan gives poor Lynn in the film, “Enjoy me. Everyone else is.”