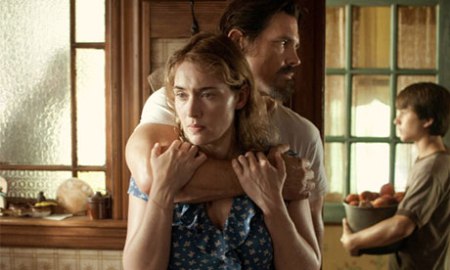 The funniest unintentional laugh in “Labor Day” is the way adaptor/director
Jason Reitman treats this eye-rolling, melodramatic romance novel as if he’s got
his hands on the works of Dostoevsky or Tolstoy.
A genteel escaped convict hides out with a grieving divorcee and offers
another chance at love? It’s “The Prisons of Madison County.”
Kate Winslet conveys a quivering, emotionally crippled vulnerability as the
single mom and Josh Brolin suggests the proper balance of menace and chivalry as
the convicted murderer. And young Gattlin Griffith is the 13 year-old who
realizes, his adult self narrates, that he is never going to be adequate as
mom’s substitute husband.

The boy Henry (Griffin) is the one the goateed and bloodied Frank approaches
in the small town supermarket. The pitch for a getaway, first to him then to his
mother, is polite with just a hint of threat.

“Frankly, this needs to happen.”

Frank assures them he just needs to lay low until the law passes by their
house, just until he can hop a freight train in the morning. But he sees Adele’s
shaky hold on sanity, the ruin she’s let the house fall into, her loneliness.
Before you know it, he’s cleaning the house, cooking dinner and — ever so
lovingly — tying her up to keep up “held hostage” appearances.

Henry, who narrates this story as an adult (voiced by Tobey Maguire), is
confused. He bonds with the new man in their house, is impressed by Frank’s
masculine tenderness and consideration. Henry might even learn a thing or two
about the fairer sex, useful tips he can try out on the pushy-edgy big city girl
who’s new to town (Brighid Fleming).
Reitman, for whom the glories of “Up in the Air” are but a fading memory,
ladles on the sap in scenes where Frank grabs Adele’s hands and shoves them into
the pie he’s making, or cradles her as he teaches her to hit a baseball. Adele
teaches Frank to rumba and cha cha and over the course of a Labor Day weekend in
1987, dares to think they have a future.
Skip past the eye-rolling unlikeliness of this scenario, the fact that nosey,
personal-space violating neighbors never notice that the guy whose picture is
all over TV is cleaning the gutters of the divorced woman’s house, and treasure
the film’s tense moments of kidnapping and near discovery. Reitman, using a
pulsing, quietly pounding Rolf Kent score and a lot of silence, tightens the
screws in these scenes like an old pro.

But as with “Young Adult,” he’s chosen material too thin to support a deeper,
more ambitious story.

Whatever the gifts of memoirist, J.D. Salinger paramour and novelist Joyce
Maynard, here her work comes off as a slightly more masculine Nicholas
Sparks.
And “Labor Day”, for all its filmmaking care and care-worn performances, is
nothing more than a beach book, inconsequential and utterly out of place in
January.