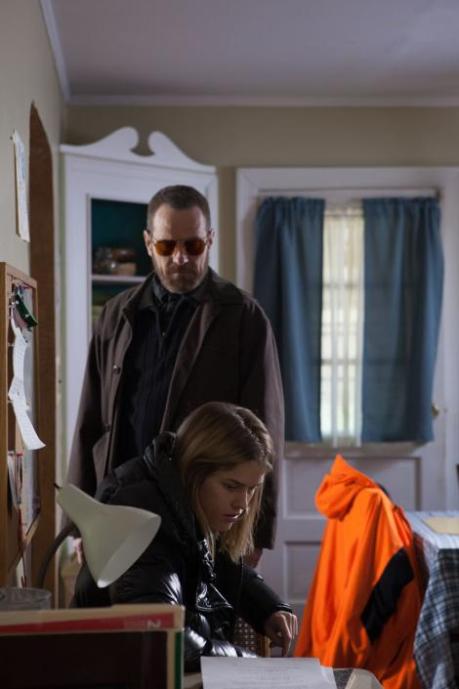 “Breaking Bad” fans will get a kick of out of seeing Bryan “Walter White” Cranston in beard and sunglasses, slinging a Slavic accent. As a hit-man/courier in “Cold Comes the Night,” he sets the film’s quiet, menacing tone with long silences broken by the occasional blood-curdling threat, delivered in venomous Vladimir Putin-ese.

“Leetle girl,” he purrs to the daughter of his kidnap victim (Alice Eve). “You haff JACKet?”

“Of course, everybody has a jacket,” the child snaps.

Sometimes, it’s as if we’re seeing TV meth maker Walter White vamping it up, pretending to be a Russian meth mobster. Maybe you giggle. I did. And then you snap out of it and appreciate this simple, deliberate and atmospheric thriller for what it is — a genre piece that works.

Co-writer and director Tze Chun takes us to a rural motel in upstate New York where Chloe (Alice Eve) lives a miserly, miserable single-mom existence with daughter Sophia (Ursula Parker). Chloe runs the place, cleans the rooms and takes her cut from the hookers and lowlifes who frequent it.

Child welfare is on her case to move, but she has nowhere to go — limited savings, limited horizons.

Then a couple of bad men making a run for the Canadian border stop for a night, things go wrong and this man with the accent needs Chloe to help him retrieve something the cops — including Chloe’s married cop boyfriend (Logan Marshall-Green of “Prometheus”) — have seized.

Chloe is threatened, slapped around and dragged into a situation the average person would wilt in. But she, like other characters in this myopic tale, has layers and inner resources we can only guess at.

Even though it’s just a semi-predictable, quasi-illogical genre piece, “Cold Comes the Night” manages several nice moments of suspense and a couple of wonderfully-staged confrontations — fights and shootouts. Eve (“Star Trek Into Darkness”) is just cagey and formidable enough to make Chloe work. Marshall-Green makes the most of a playing a cliche — a small town cop who reeks of corruption.

But Cranston takes small bites of this Beef Jerky Tartar script and chews, chews chews — savoring every corny fake-Russian line like the voice actor he was before “Breaking Bad” made him a star.

“I ask one last time,” he growls, letting us taste the Borsht with him. “You vill get me dat Jeep, or I will put boool-et in leetle girrrrl.”

He’s having fun with this, and so should we.