Movie Review: Cage is Uncaged and Unhinged for “Mom and Dad”

Posted on December 17, 2017 by rogerinorlando 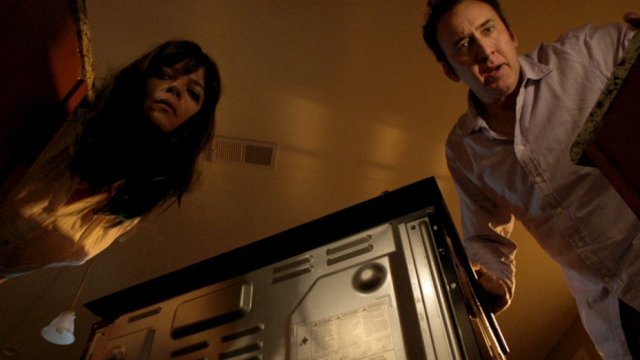 Maybe there are actors who could have made this fusion of “The Purge” and “Living Dead” titled “Mom and Dad” funnier than Nicolas Cage. But Brian “Crank” Taylor knows a thing about gonzo, violent and hilarious. And so does that “Kick Ass” bug-eater, Mr Cage.

“Mom and Dad” is a jaw-dropping horror farce about American parents, waking up nationwide (It seems to have something to do with static, which is what your TV did pre-HD) and murdering their kids.

In quick, broad strokes basically focusing on one family headed by Selma Blair (as scary as those bangs suggest) and Cage, we’re reminded that today’s kids may have it coming. Indulged, rude, electronically independent and out of control on a cellular and cell-phone level, they’re labeled narcissistic little monsters because sometimes the label fits.

Carly (Anne Winters of TV’s “13 Reasons Why”) is a rude, profane and self-absorbed high school sophomore who keeps her school uniform skirt too short and her temper shorter. She steals from her parents, ignores them in favor of social media and is planning on something sexual with her forbidden beau, the upper-classman Damon (Robert T. Cunningham).

The stealing? It’s so her out-of-control pal Riley (Olivia Crocicchia) can score some Molly for them.

Younger brother Josh (Zackary Arthur) is Dad’s little man. The movie’s first big laugh is Cage charging in on the boy for an enrage…tickle fight.

Then, one school day, kids are called out of class, one by one. They’re greeted by a deranged mob of parents, screaming for them on the other side of the gate. A couple answer their parents’ summons. One is jabbed to death with car keys, another suffocated with a garbage bag, a third impaled by a yardage marker on the football field.

This “Purge” of those we’ve given birth to? It’s on.

Carly and Riley make their getaway, with Carly freaking out over what’s happening — turning on the TV to news crawls of “”Terror Attack or Mass Hysteria?”

Parents are warned, by radio, “Do NOT go near your children!”

Which they ignore. Carly, Josh and Damon try to survive the slaughter. Their parents seem to have no control over these deep impulses, though flashbacks do tell them (and us) how they’ve doted on these kids, no matter how big their respective childhood mistakes.

Cause and effect, we wonder? That, and maybe a certain bitterness about the lives that were lost when new life was brought into a family.

“I used to be Brent. You used to be Kendall. And now we’re just…Mom and Dad.”

Taylor treats us to a series of show-stopping scenes — a hospital childbirth  that climaxes with the new mother trying to murder her newborn babe, a grim glimpse of new fathers, staring through the window of the hospital nursery, longing to “get at” their children.

“Mom and Dad” (opening in limited release and VOD Jan 19) is peppered with tasty, nasty lines. The teacher in Kendall’s Zumba class is a player.

“He’s making his way through that class like stomach flu!”

TV quack Dr. Oz tries to explain away the crisis. And the third act of this brisk little nightmare? It features the dazzling arrival of Lance Henriksen.

The performances are somewhat uneven — young Josh (Arthur) is the only character to exhibit genuine terror. The climactic struggle is packed into the suburban family home, much like “The Purge.” a

It’s not ambitious and not particularly deep. It’s all about the one-liners, with Dad Brent and Mom Kendall (“That’s not even a REAL NAME!”) breaking out their trusty reciprocating saw, “It’s a SAW ALL. It saws ALL!”

But “Mom and Dad” is a reminder of how much gonzo fun a B-movie can be, how hilarious “Crank” was and what a hoot Nicolas Cage — who makes almost entirely B, C and D movies these days — is when he’s uncaged and unhinged.

MPAA Rating: R for disturbing horror violence, language throughout, some sexual content/nudity and teen drug use