Movie Review: “The Truth About Lies” 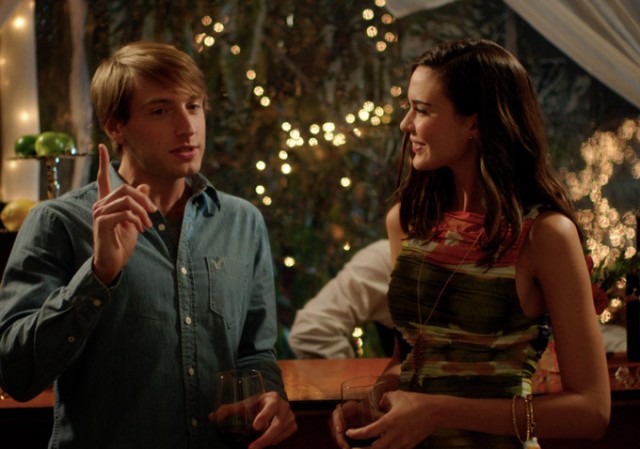 The biggest laughs in the starved-for-laughs romantic comedy “The Truth About Lies” are ones the filmmakers, and the star, could not have anticipated when they filmed it.

The comedy, about a loser who lies like he breathes, lies on the fly, answers every question that flummoxes him with a whopper.

And as he’s a bit stupid, the whoppers come fast and furious for Gilby Smalls , whose last name isn’t necessarily a reflection of his hand-size.

A job interview where he’s burnished his resume? “Harvard?”

Oh, you must have known Professor So-and-So.

“Sure, my mentor, really. Why, many’s the time he took me under his wing…”

“Right, right, although, we were never really certain, because she was just discovering her true gender…”

“Yeah, and I remember the funeral, we were all weeping over the casket…”

“And I spread the ashes all over Boston Common…”

I spread them. In New Jersey. She was my sister.

It’s to the movie’s detriment that the lying takes a back seat to so many other “issues” Gilby (Fran Kranz) has — a mother (Colleen Camp) who never told him who his father was (she’s a fibber, too), a girlfriend (Mary Elizabeth Ellis) who dumped him…tomorrow.

And after dealing with one rude customer too many at the cell phone star where this “I don’t WANT a career, I just want to live my life” he’s without a job.

That doesn’t stop him from telling a pretty woman (Odette Annable of “Supergirl”) he’s a tech entrepreneur who just sold his company at a party. And that leads to her workaholic tech CEO husband (Chris Diamantopoulos) throwing a job “baby sitting” his firm while he’s out of the country.

It takes one set of lies to impress a woman at a party, and a whole other level of lying to fool the underlings at the tech company — creating a fake name for the company he sold, for starters.

And then there are the lies required when you’re falling for the CEO’s “spiritual seeker” of a wife. “Yoga? I do it all the time.” “Sweat lodges? No no no. I did this all the time when I was a kid.” “Sushi? Love it.” Gulp.

“Wow. You must REALLY love wasabi!”

And the endless chain of fibs runs out of gas at about the time we’re thinking “Ick, he’s picking up a married woman he’s done nothing but lie to.”

Writer-director Phil Allocco punctuates scenes with blackout quotes about lies and “the truth” from the likes of Mark Twain, Hunter S. Thompson and Oscar Wilde.

“The truth is rarely pure and never simple.”

None of which is as funny as the unplanned similarities to a certain politician who never, ever admits a mistake or to a piece of knowledge he doesn’t have, covering with “Sure” and “I’m the best at” this or that “awesome” thing. Which he knows nothing about.

If this movie was better it might make rom coms great again. But I cannot lie. It won’t.

2 Responses to Movie Review: “The Truth About Lies”