Movie Review: A father and son broken by grief are “The Bachelors”

Posted on October 10, 2017 by rogerinorlando 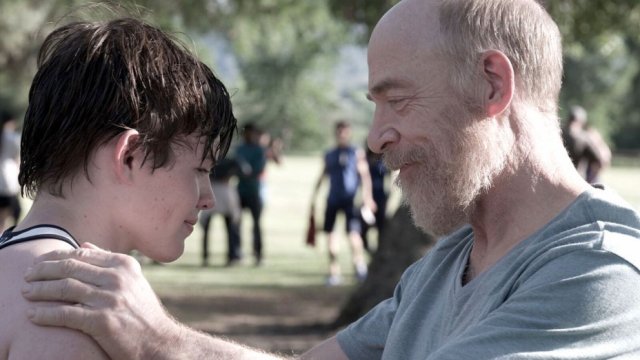 J.K. Simmons has steered his Oscar-winning career from scary guys (“Whiplash,” TV’s “Oz”) to whimsical ones (“Juno,” and the definitive J.J. Jameson in the Tobey Maguire “Spider-Man” movies).

But of late, he’s sought out vulnerable, damaged characters, none more damaged than Bill, a father broken by the death of his wife in “The Bachelors.” First reel to last, Simmons’ Bill seems medicated or on the verge of tears. In the very first scene, his first words lay out his entire state of mind to his son (Josh Wiggins of “Max”) and the viewer in just a sentence.

Whatever teenage Wes is going through, Dad is bereft. He quits his teaching job and the house that they shared with his late wife and start over. Kevin Dunn is Paul, the old college buddy now running a fancy private school for “spoiled little snots” in the big city. Bill will be his pity hire.

St. Martins is where the deeply depressed father will get back into teaching math, earn the interest of the available French teacher (the always beguiling Julie Delpy) and finally get some help (Harold Perrineau plays his medication-happy shrink).

It’s also where Wes, who can’t afford to grieve thanks to his dad’s state, has to find new friends (Tyrel Jackson Williams of TV’s “Brockmire”) and his place in the jock-centric culture. Again, it’s the French teacher who intervenes, putting her “advanced” newcomer in charge of getting the brooding, failing Lacy (Odeya Rush) fluent.

The story progresses along predictable but sympathetically acted lines, with Bill trying to keep his shaky psyche together and Wes trying to figure out what the deal with this disturbed, rich “Princess of Darkness” who won’t give him the time of day — in French.

Writer-director Kurt Voelker scripted the leaden “Sweet November” and the cheap-jack cartoon “Rock Dog.” Saying he traffics in cliches, tropes and archetypes might insult his USC education, but it’s accurate. Punk jock besmirches Lacy’s honor in the cafeteria? You know what Wes is going to do, and what he’s going to do it with.

“The Bachelors” is movie romance comfort food, rarely surprising, rarely upsetting in the places it takes its couples.

But the players rise above the material, with Wiggins and Rush setting off sparks and Simmons and Delpy maintaining the mystery of their attraction, keeping the emotions that brings up close to the surface.

And Simmons makes the deflating exhaustion of grief palpable.

Credits: Written and directed by Kurt Voelker,  A Freestyle release.