Posted on September 22, 2017 by rogerinorlando 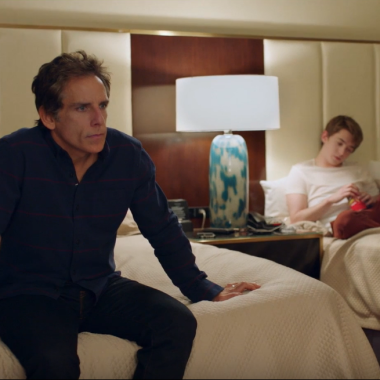 Ben Stiller gives his most soulful, vulnerable performance ever in his new film, “Brad’s Status.” Writer-director Mike White (“The Good Girl,” “Year of the Dog”) has conjured up a gentle, realistic and melancholy midlife for Stiller to act out, one that cuts awfully close to the bone for him, and us.

Remember Randy Newman’s acrid take on the pointlessness of the purposeful life, “It’s Money that Matters?” “Status” is like that, a further exploration of Stiller’s wasted-life worries of “The Secret Life of Walter Mitty” or Noah Baumbach’s “While We’re Young.”

To say that it’s no surprise that Stiller announced he’s divorcing longtime wife Christine Taylor with this film freshly in the can isn’t a cheap shot. The performance is that studied, unsettling enough to let us think Stiller was brooding on this very subject.

Brad Sloan, who narrates his story start to finish, has the sense that “the world was rubbing my nose in something.” And that something is what therapists call “relative deprivation.” He’s not kept up with his high-flying college classmates.

There’s the tech guru (Jemaine Clement) who retired at 40 and lives in Maui with two nubile young women.

And a hedge fund manager (Luke Wilson) with his own private jet and designer upper class family finishes off the quartet of envy.

Brad’s starting to realize that running an online non-profit consulting firm in Sacramento — “a secondary market” — mediocrity incarnate, where he’s “surrounded by beta males” — weren’t the best choices. Wife Melanie (Jenna Fischer, where’ve you been since “The Office?”) may be happy and satisfied. But Brad seethes over the lack of status, the absence of luxury in their lives, the petty indignities inflicted on people whom the service sector figures they can dismiss.

Hell, he can’t even upgrade their plane tickets when he takes his musician son (Austin Abrams) to Boston to visit colleges Brad could never get into.

This trip — they plan to hit Harvard, Tufts, Amherst and Williams — is eye-opening for Brad. His boy Troy may be affect a laid-back attitude, but it’s obvious his dad’s been too self-absorbed to be fully tuned in to the kid’s life.

As in, he’s applied to Harvard, and just might get in. The kid dismisses even bothering with Yale. He’s a prodigy and a scholar. Brad? He’s a newspaper journalist laid-off into non-profit work. He desperately wanted to go to Yale.

White may rely entirely too much on interior monologues — Brad fretting that “the world hated me, and the feeling was mutual.” But he’s cooked up a vivid flesh-and-blood portrait of angst for the angsty-Stiller to play. Brad fantasizes the paths he might have taken, about the “easy” lives of those ex-classmates, veers between envy and schadenfreude in his obsessions about them. His “advice” to a Harvard friend of Troy’s (Shazi Raja) is a cry for help, a lament filled with self-pitying white privilege.

“You have enough,” she assures him, a sobering put-down if ever there was one.

And Brad passes on his case of nerves and fear for the stakes they’re playing for to his son, who speaks frankly to the old man, but whose passive exterior can’t disguise his rising concern that Dad is desperate to live vicariously through him.

The old classmates have revealing encounters with Brad, and White and Stiller make us squirm with the discomfort Brad feels at these renewed contacts. Will he accept his place with them, voice his resentment or lash out?

It’s Ben Stiller. What do you think will he’ll do?

But that’s a marvel of this intimate chamber piece of a comedy. White finds ways for Stiller to surprise us, and the veteran actor manages to hide his cards in scene after scene, letting us keep up with him, but never ever allowing us to guess where his emotions will take him next, and what form they’ll take.