Posted on September 6, 2017 by rogerinorlando 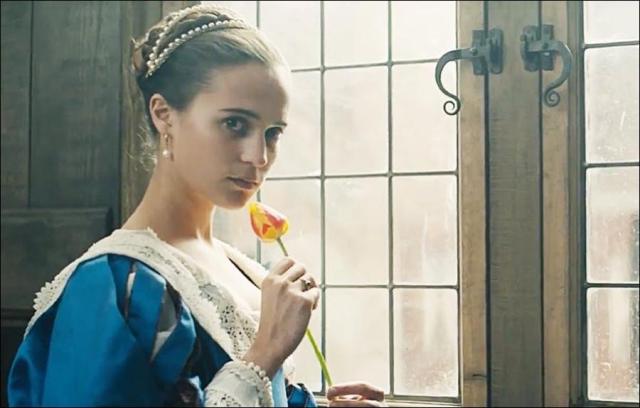 To people in the know, financial “bubbles” must have long looked like hurricanes as we see them in the digital/satellite age. They’re slow-moving disasters waiting to happen giving plenty of warning that the End is Nigh, if you’re willing to heed it.

“Tulip Fever” uses the first and most famous such bubble, the Dutch mania for and speculation in tulips, then-seen as exotic, rare beauty brought in from the Far East, as the backdrop for a slow-moving romantic disaster that anybody who’s been to a period piece picture can see coming our way from the first act.

It’s an unwieldy, unsatisfying film that doesn’t live up to the high-minded allegory it aims to be. But that it isn’t an analog to the disaster that it depicts is a tribute to some clever bits of stage business, some good performances and spot-on period design and detail.

A couple of years back, Alicia Vikander experienced her own movie star bubble (for actors and writers, they’re called “a moment”) when no film seemed complete without her in it. Here, she is Sophia, an impoverished orphan who has been married off to a rich spice trader (Christoph Waltz) in 17th century Holland.

The Abbess who makes the marriage deal (Judi Dench) isn’t a villain. She’s looking out for Sophia and her orphaned siblings’ best interest. And even though Cornelis Sandvoort is played by that Oscar-winning mustache twirler Waltz, he’s not the heavy here either. He is indulgent of his young bride, a tad impatient for her to give him an heir, but no tyrant — just a tad gauche.

And as “The King of Peppercorns,” his spice specialty, he knows a fiasco when he sees one in the wildly speculative tulip market. Common people are gambling and getting rich. The market only goes up and up.

Madness might also describe Sophia’s swooning reaction to the scruffy young painter (Dane DeHaan) commissioned to paint the family portrait (with a tulip in the background). She. Must. Have. Him.

And Jan Van Loos, played by DeHaan at his DiCaprio Lite breathless best, must have her.

Our narrator, the Lady’s maid (Holliday Grainger, who has the sexy fleshier look famous for that period in painting), knows how this story plays out, and hints that tulip fever had a role in changing the lives and fortunes of all involved.

There’s a quack doctor (Tom Hollander, hilarious) who specializes in “female mysteries,” a drunkenly inept painter’s assistant (Zach Galifianakis), the fishmonger (Jack O’Connell) who loves Maria the maid (Grainger) and figures tulip speculation is the key to their future.

And we have the two folks who run this tulip trade — the Abbess, acting on behalf of the Pope (we’re told) and the mysterious Mr. Prater (David Harewood), who traffics in pure color tulips, and the exceptionally rare multi-colored varieties, “breakers,” the most valuable of which is named Admiral.

The great playwright Tom Stoppard had a hand in the script and touches of his wit show through, here and there. There’s no shortage of detail about the trade, the piety (and hypocrisy) of the Dutch when they were the richest nation on Earth. The structure of the tale is a tad too Shakespearean for its own good — coincidences, abrupt bursts of passion and commitment, mistaken identities.

It all comes together rather too neatly to be convincing or satisfying. The presence of Galafianakis gives away his function, and giving model-turned-movie-star Cara Delevigne a bit part as a pickpocket prostitute just reminds us what a kiss of death poor Dane DeHaan is in most movies. He and Delevigne co-starred in “Valerian,” the biggest flop of the summer.

We could be looking at what future generations will call “The Curse of Dane DeHaan.”

“Tulip Fever” isn’t on that scale, though one does wonder if the explicit sex scenes were desperate add-ons, late in the screenwriting process, and if the market has peaked and passed for the hollow-eyed DeHaan, and the delicate Ms. Vikander, so model-thin, so out-of-place in the world of Rubens, Rembrandt and better-fed girls in pearl earrings.