Posted on November 28, 2016 by rogerinorlando 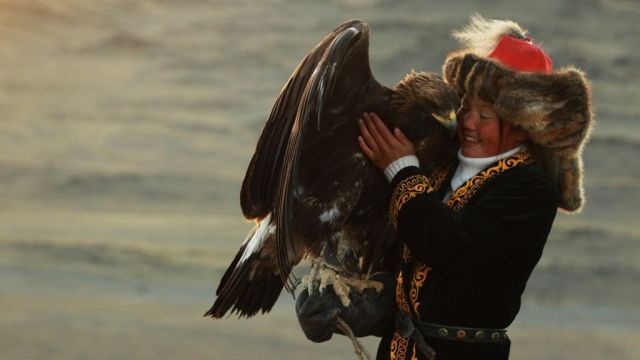 A Mongolian teen breaks the gender barrier in her native land’s sport of eagle hunting in “The Eagle Huntress,” a striking if predictable and plainly-staged docudrama set in one of the world’s most forbidding landscapes.

In Mongolia, the steppes tribesman who once plundered their way across Asia to the edge of Europe still ride their sturdy, furry ponies. And they still hunt with golden eagles, which they kidnap from the nest and train, like falcons, for sport and competition.

Aisholpan Nurgaiv is 13, and as she comes from a long-line of eagle hunters, she’s hunted with her father for years. She’d like to try her hand at becoming the first female to hunt and compete with an eagle in this patriarchal culture. She isn’t prevented from doing this, but filmmaker Otto Bell found plenty of elders to recite gender roles, Mongolian variations of “This just isn’t done.”

Her father is understanding, and supportive.

“It is not a choice. It is a calling you have in your blood. Maybe it is in her blood as well.”

So he sends up down a cliff face to nab an eaglet, and they commence to training it.

Their attitude towards the birds is not Westernized. She doesn’t name her enormous, dangerous “pet,” and we’re spared the cruelly dull downtime the eagle endures, hooded mostly, in between feedings and sessions. They only keep the eagles for seven years before turning them back into the wild, which is about as humane as this practice gets.

Father and daughter then head off to “train” by siccing the bird on the local foxes, a process that is bloody and brutal — nature at its most natural. Yeah, it’s “for a movie,” but still.

And then there’s the big festival where the girl and her eagle must show their stuff among the menfolk judge trainers by timed chases of prey and command of the bird when it returns to their arm. And they’re judged by their fashion statement.

Sure, the poor and probably sexist patriarchy is a bit cowed by the film crew she has with her, and the international media covering this “event.” One suspects that the whole affair is about as “real” as “Duck Dynasty.” Daisy Ridley, of the recent “Force Awakens” “Star Wars” movie, narrates the story (conversations are subtitled) and took a producing credit on the film.

The capture sequences are fraught and edited for maximum suspense, and Bell has a gift for capturing the home life — Aisholpan goes to a boarding school, with her siblings, during the week, and trains and feeds her bird (gristly goat leg bones, from the looks of it) on weekends. The canvas covered yurts and simple, somewhat primitive lifestyle of her family are compellingly depicted.

But some Western viewers may wince at the whole undertaking, and not just its contrived feeling. Like me, their sympathy’s for the poor fox.