Posted on April 4, 2015 by rogerinorlando 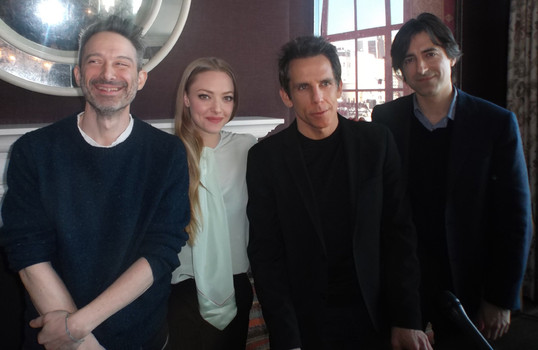 Adam “Ad-Rock” Horovitz remembers his first “whippersnapper moment.” The once-and-future Beastie boy, 48, was at an outdoor concert in Brooklyn a while back.
“There were these kids hanging out next to us,” Horovitz recalls. “One guy next to us was going on about all these shows he’d done, all these bands he’d played in. For years. ‘Blah blah blah.’ Then he turned to me, ‘What was the first show that YOU played?’
“I said, ‘That was in 1982.’
“And he goes, ‘Oh man. I wasn’t even BORN yet!'”
Horovitz, whose band’s blew up with the chart-topping, generation-defining hip hop/punk mashup “(You Gotta) Fight for Your Right (To Party!)” back in 1986, laughs.
“It didn’t necessarily make me feel old. I just felt…EXPERIENCED.”
His filmmaker friend Noah Baumbach shares that “experienced” feeling. The director of “Greenberg” and “Frances Ha” cast Horovitz, and their mutual friend Ben Stiller, along with Naomi Watts, Adam Driver and Amanda Seyfried in “While We’re Young,” a gently mocking comedy about the new generation gap amongst the culturally hip, a film earning comparisons to Woody Allen.
Baumbach can walk down any street in Lower Manhattan and see the guys in their skinny jeans and retro Hombergs, resuscitating fashions, music and trash culture that the 45-year-old Baumbach though his generation had buried.
“I keep having the experience of hearing music that I resisted as a kid because it wasn’t cool…being played now by Millennials ‘rediscovering’ it and feeling different about it. I even use some of that music in the movie. I mean, Lionel Ritchie? ‘All Night Long’? Come on. Didn’t like it as a kid, and having kids play it back to me and realizing how good it is was a little humbling.”
“While We’re Young” serves up Stiller and Watts as a 40ish childless couple bored by their baby-centric peers, enamored of a younger, hipper couple (Driver and Seyfried) who seem to be everything they never were.
Horovitz, who has dabbled in acting over the years, is paired up with Maria Dizzia as the peers Watts and Stiller’s couple wants to avoid becoming.
“A moment where I felt old?” Baumbach laughs. “Seeing Ad-Rock, in character with a baby strapped to his chest. Funny. But poignant, too.” 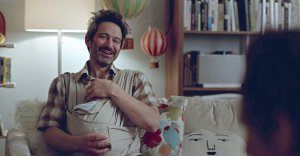 Baumbach “has something of an evil genius for casting” critic Ty Burr noted in The Boston Globe, with Stiller and Watts ably capturing the desperation of the no-longer-young/not-really-old with skill, never more so than in a scene when Watts joins the 20something Seyfried in a hip hop dance exercise class. Horovitz is “grumpy and marvelous” Burr says, in a film Anne Hornaday of The Washington Post called “a thoughtful and resonant depiction of midlife anxiety.”
Mid-life anxiety may be more on Baumbach’s mind than Horovitz’s. Like the characters, all caught up in the world of low-stakes intellectual documentary filmmaking, Horovitz was in the middle of a years-long non-fiction film which he abandoned just as the offer to act in “While We’re Young” came along. He might like to act a bit more, seeing as how his sister Rachael is a pretty famous producer and his father, Israel (“My Old Lady,””Author Author”) a noted writer and director. But first, he has another obligation.
“I am looking back on my legacy, at this point. Mike (Michael “Mike D” Diamond) and I are writing a book on the band.”
And unlike the documentary, which was to be about legendary New Yorker arts critic Peter Schjeldahl’s passion for putting on “very dangerous, and very cool” amateur fireworks displays, Horovitz won’t be able to abandon the book. “We have a contract and all.”
And about “While We’re Young,” hipsters — don’t take it personally, he says.
“I myself don’t wear skinny jeans,” says the hippest member of the relaxed fit generation. “But that’s just me.”