“Movie Review” “What We Do in the Shadows” 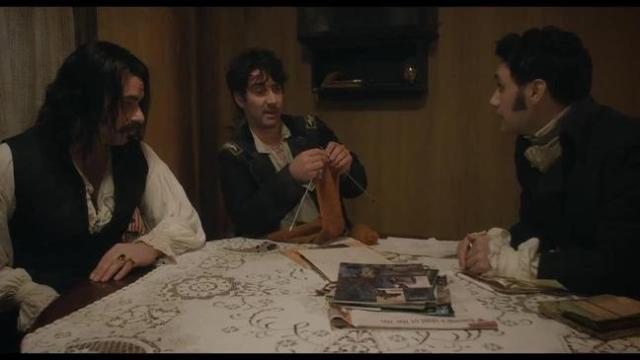 “What We Do in the Shadows” is a one-joke comedy about vampires, and yet another mockumentary/fake documentary, a gimmick that has turned seriously stale in recent years.
But with those crackpot Kiwis Jemaine Clement and Taika Waititi behind it, you can be sure that one joke is going to deliver a lot of laughs, enough that the format won’t matter.
A film crew follows a group of New Zealand vampires over the several months leading up to their big annual gathering, “The Unholy Masquerade.” Forget about that big ball, because the filmmakers do, for much of the movie.
No, “Shadows” is a character comedy about four mismatched vampires — flatmates in urban Wellington. They talk about their undead lives, their pasts, their loves and the pluses and minuses of being Children of the Night.
Viago (Waititi) is the first guy we meet, our 18th century metrosexual tour guide. The minute Waititi rises, comically, out of his coffin, he brings the deadpan, hard and fast.
He moved to New Zealand for a long-lost love whose picture he keeps in a silver locket. Put it on for the camera crew, Viago!
“Unfortunately, we vampires cannot WEAR silver,” he says as the smoke rises from the spot on his chest where the locket sits.
There’s Deacon (Jonathan Brugh), the “bad boy of the group.” He’s only 183, likes his leather and doesn’t do his share of the flat’s chores. Those “bloody dishes” (literally), for instance.
“Vampires don’t do dishes!”
Vladislav (Clement) is the sexy beast of the group, the long-haired seducer.
And then there’s the silent, bald and ancient vampire Petyr (Ben Fransham) who never goes out, except to feed, and who probably gave them all their start in “the business.”
The team that gave us “Eagle vs Shark” finds amusement in the mundane aspects of this nocturnal life. You can’t brag about what you are,using “Twilight” lines to pick up girls. You can’t get past the velvet rope at all the best nightclubs to feed because vampires “must be INVITED in.”
Then, there’s the matter of trying to dress for a night on the town when  you don’t have a reflection. That’s tough.
They trash talk with werewolves, who need to police their own profanity.
“We’re WEREwolves, not SWEARwolves!”
A new recruit is bitten, a “familiar” (Jackie van Beek) gripes about being the human slave who has to take in their bloody (literally) dry-cleaning and mow their lawn.
It’s flip and playful, with delightfully cheap effects — a little wirework flying, cute bits of business with mirrors and the transformation into a bat, which vampires do when they disagree.
“Bat fight!”
Again, it’s just one joke, and at 86 minutes, goes on too long. But Clement & Co. wring every last “Lost Boys/Twilight Saga” laugh out of it.