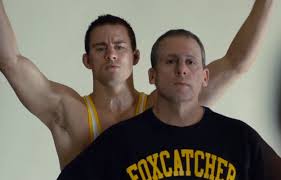 Gloom gathers over the movie “Foxcatcher.” The skies are perpetually grey and the only time we see don’t see red leaves tumbling to the ground is when they’re covered with snow.
We know something fatal is coming, even if our memories of the news story that broke there over 20 years ago are faint.
“Foxcatcher” is a story of obscene wealth and the careless arrogance that comes with it, of the in-bred lack of impulse control for those raised in a world that has never told them “No” or failed to indulge their every whim.
Some of the super rich get their jollies yacht racing, breeding horses for fox hunting or wielding behind-the-scenes political power. John E. DuPont found that limiting. A dilettante’s dilettante, he acquired degrees and published books as an ornithologist, donated buildings to colleges, spent the money to become a famous stamp collector and then, in his 50s, decided athletics was the next field he’d dabble in.
He collected Olympic wrestlers and swimmers at his family’s Pennsylvania estate. He liked to change his sissy French middle name “Eleuthère” to “Eagle,” and some of his lackeys bought into it.
Steve Carell transforms himself into a flesh-and-blood version of his “Despicable Me” super villain “Gru” as DuPont, a beady-eyed, eagle-beaked, barrel-chested man-child who lured Olympic wrestler-brothers Mark (Channing Tatum) and Dave Schultz (Mark Ruffalo) to his state-of-the-art facilities, where he could mine about, wear tracksuits and kneepads and pretend to coach them (older brother Dave was a college coach and Olympic champion) and then bask in the glory of “his” achievement.
Carell’s thick-featured, 50ish DuPont doesn’t look like the bearded madman we saw on the evening news. But with every breath, every brown-toothed grimace of a smile, he lets us know this guy is “off.”
And so is his “protege,” Mark Schultz. As Mark, Tatum juts his jaw and keeps his head down, covering ground in a muscle-bound simian stride. Always focused, Mark has an Olympic gold medal and a college degree, but he relies on his brother for training and access to the facilities where Dave is coach. Mark needs the tiny per diem schools pay him to speak to students and show his medal just to eat and gas up his cheap hatchback. When DuPont calls, offers to put him up, feed and pay him, it’s the answer to a prayer.
It’s just that DuPont, assembling a crack Team Foxcatcher, wants Dave, too. And the wily older brother is slow to warm to the weirdo.
“What’s he GET out of all this?”
A tug-of-war over the fragile Mark ensues between the brother-coach and the fellow whose family has been rich for so many decades that he figures anything can be bought — including Olympic glory.

Actor’s director Bennett Miller (“Capote”) introduces Ruffalo and Tatum in an almost dialogue-free opening — training, wrestling, getting under each other’s skin and drawing blood. Their sibling connection can be read in Rufflalo’s eyes, in the way Tatum leans in to him, forehead on forehead, a wrestling posture that symbolizes their communication and closeness. It’s no stretch to see the beefy Tatum as an athlete, but he brings a sullen resentment to the role, an accomplished Olympian stuck in his brother’s shadow.
Ruffalo bulked-up and mastered the physical shorthand of the sport for his part, and brings a regarding soulfulness to Dave. He watches this odd duck his brother has hooked up with, and worries.
Carell, though, is the real shock to the system here. He is quirky, queer in the old fashioned sense, and pathetically funny. His DuPont is a wannabe surrounding himself with real athletes. Carell makes you feel sorry for the lonely rich man, failing to impress his dowager mother (Vanessa Redgrave), collecting tanks, enjoying target practice with the local police on a range he has built on his family’s estate. It’s a life of impunity, isolation, drugs and a craving for accomplishment to match his legendary ancestors.
Miller and his screenwriters toy with the timeline of events — most of what is here happens around the Seoul Olympics of 1988, DuPont didn’t set up his training until the 1990s.
But that doesn’t diminish or dilute the point of “Foxcatcher,” that to the monied classes which no “death tax” can touch, the rest of us are eternally “ungrateful.” And their contempt can have deadly consequences for people with so little regard for those they dare not call “the little people” except behind closed doors.