Netflixable? Nicolas Cage can do better than “Looking Glass” these days

Posted on January 24, 2018 by rogerinorlando 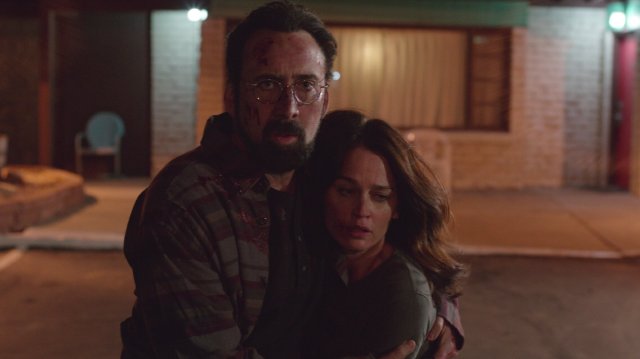 When you’re keeping to a movie a month schedule the way Nicolas Cage is, it’s a bit too much to expect every indie outing to be another “Mom and Dad” (January’s dark delight) or the current buzz of Sundance, “Mandy.”

Veteran Cage-watchers know that the vast bulk of the Oscar winner’s output these days, outside of killer cameos in major studio releases, is comprised of Netflix or VOD filler.

That’s where “Looking Glass” fits into the Cage filmography. It’s a run-of-the-mill paranoid thriller set in a remote motel where Cage, as “Ray,” starts to believe everybody’s out to get him. Because pretty much everybody is.

Nothing supernatural to see here, just a desert southwest chance for Ray and Maggie (Robin Tunney) to “start over.” They need it, for reasons that become clear as the story unfolds.

Or unravels. Because the moment Maggie chirps, “This all feels really good to mem Ray. I think we’re going to be real comfortable here,” Ray starts to have his doubts.

The “regular” customers at the Motor Way Motel give him the willies. The service station across the street is run by the menacing desert cousins of those “Deliverance” Georgians. The old owner of the motel, who fled the moment Ray’s check cleared, cannot be reached.

Before you know it, Ray’s the creep in question, peeping in on all kinds of “Twin Peaks/Blue Velvet” perversions.

When the guest of one of the paying customers turns up dead on the evening news, Ray is alarmed. Because he knows she was there, and the only way he could know that is if he was checking out her naked activities in Room Six.

So telling the busybody cop (veteran character actor Marc Blucas) is out of the question. Howard the sheriff seems awfully sure that Ray is in touch with the former owner, and that he’s been told…something.

“You know, the more you watch, the less you feel.”

A dead pig in the pool, a cop asking more questions, somebody knows something and Maggie is both in the dark and in danger, thanks to Ray’s predicament.

Tunney is stuck playing a wife rendered unstable by whatever brought them there and Ray’s role in that. And Cage does a tamped-down version of his Everyman-We-Watch-Come-Unglued, as Ray.

Director Tim Hunter (“River’s Edge”)  has been around long enough to know something about creating atmosphere and mystery. The formula for pictures like this set us up to root for Ray as he faces a town of “Straw Dogs,” hostile locals who know his motel’s dirty secrets, who think he knows them and are determined to keep him quiet and compliant.

The wife is she who must be saved/protected/rescued from those locals.

“Looking Glass” drifts from that formula, but finds nothing that compelling to take its place. Cage is never less than interesting to watch, even in the worst movies, and this is far from that. But Ray is amped up, disturbed and yet passive at the same time.

Some scenes pack a punch (literally) and that sense of doom hanging over it all shows up here and there. But “Looking Glass” fails to be anything more than another make-work project for the cinema’s busiest actor, a man with bills to pay and a conviction that the Devil finds work for idle hands.

It’s just that sometimes, it’s better to leave those hands idle than to take whatever the next offer you can squeeze in might be.