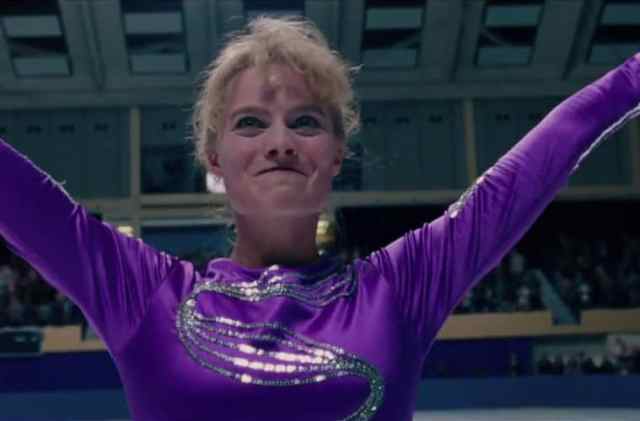 It was hard to root for Tonya Harding back when the blue collar “redneck” skater was battling the petite princesses of figure skating in the late ’80s and early ’90s.

She was more “girl next door” than her prettier contemporaries, muscular in a way skating fans didn’t appreciate, unschooled at makeup, unfiltered in her response to feminine and effeminate judges who were loathe to give the woman her due.

And then there was the drama, the crying, the “not my fault” whining, and finally “the Incident.”

“I, Tonya” lets us see her hard life and victimhood through her eyes, as performed by the beautiful and petite Margot Robbie.

Director Craig Gillespie (“Lars and the Real Girl”) and romance screenwriter (“P.S. I Love You”) built “I, Tonya” around “wildly contradictory” and ironically hilarious interviews with the principals of Harding’s life, career and downfall.

And they turned Robbie loose on this fierce, unrepentant “white trash” over-achiever in a performance that is flinty yet self-pitying, two-fisted and bloodied but unbowed. For all those moments where Robbie lets a little of her demented turn as Harley Quinn in “Suicide Squad” flash across her teeth and eyes, it’s a stunning transformation and a fearless performance, every it the equal of Charlize Theron’s transformation from runway model to “Monster.”

We figure her out, early, from that first day her foul-mouthed chain-smoking harridan of a mother (Allison Janney, magnificently hateful) bullies her would-be coach (Julianne Nicholson, perfectly demure) into taking her child, a “soft four” years of age, into her Oregon skating school. Years pass, but the mother-coach bickering never ends.

“She DOES chop wood every morning!”

Robbie/Harding narrates her story.  The great athletes perform with a chip on their shoulders, and Harding’s was a doozy. Rivals are always “little bitches,” from the time she was outskating them as a tyke to her tweens and teens and beyond. She could be fragile, facing death threats and class snobbery at every turn. But she was a fighter.

“I, Tonya”  is interspersed with modern day (middle-age to old age makeup) “interviews” recreated for the movie. So we hear her talk about the unhappy home and violence meted out by her mother, only to see Mom, a pet bird picking at her ear on her shoulder, deny it.

The same is true of her first love and eventually first husband, Jeff Gillooly, played with self-aware resignation by Sebastian Stan. Tonya describes the heated juvenile sex, the beatings, the succession black-eyes she had to hide with stage make-up.

“OK,” Jeff counters in his interview, “I NEVER did this.”

We meet Jeff’s delusional lives-with-his-parents “security and anti-terrorism expert” and future Tonya “body guard” Shawn (Paul Walter Hauser, in a spot-on impersonation), an obese dope who lies like he breathes, with the confidence of a clown who never expects to be fact-checked or disbelieved.

All of which sets the table for “the incident.” Gillespie, Robbie and Rogers do such a good job of building this back-story that we almost forget that’s coming. The movie is that good.

“I, Tonya” flirts with mocking its characters, but Janney and especially Robbie counter that with their unblinking, “not on my watch” performances. Yeah, you have to take what the title character says in her version of events with a grain of salt, but she is not to be dismissed as some hapless rube. Robbie doesn’t let that happen.

Want confirmation of the mountain Harding and women like her have to climb? Read the MPAA rating at the bottom of this review. They were more bothered “pervasive language” than the film’s jaw-dropping “pervasive” domestic violence. The roundhouses hurled at her by her husband, the balled-fist “slaps” delivered by her mother, the shooting a careless cop ignored, it’s straight out of a Tammy Wynette song.

In a year when fierce women are stepping up and demanding to be heard, “I, Tonya” gives them another type of role model. And in an awards season where the fearsome Frances McDormand (“Three Billboards Outside Ebbing, Missouri”) could simply muscle and menace her way to another Oscar, Robbie’s “never been a girlie girl” Tonya grits her teeth, balls up her fists and announces, with this performance, “Not so fast, sister.”