Movie Review: “Just Getting Started” is Mostly Wrapped Up

Posted on December 9, 2017 by rogerinorlando 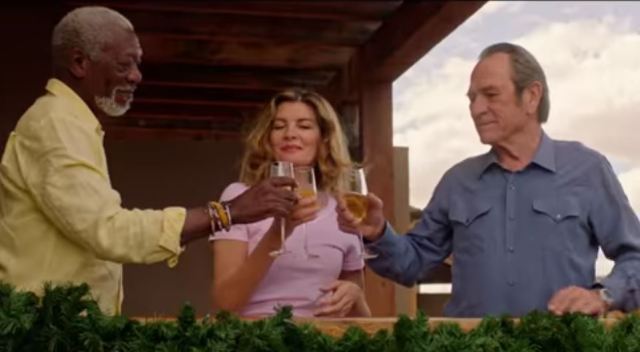 We get old, the AARP come-on arrives in the mail, we settle into retirement communities.

And old, if not-quite-over-the-hill movie stars make movies about retirement communities. Old directors? They direct them.

“Just Getting Started” is Shelton’s tepid take on old age among the well-heeled in Palm Springs, a Ron Shelton comedy (a little sex, a little sports, a little profanity, a threat of violence) as seen from the front seat of a retiree’s golf cart.

“Happiness is not a condition,” is Duke’s mantra. “It’s a CHOICE!”

Then this rich Texan and “man of mystery” Leo (Jones) shows up to ruffle his feathers and tempt his lady friends away from him. He’s followed by Suzie (Russo), a barfly with a Yorkie and a quick brush-off to anybody who sidles up to her offering to “get the next round.”

Duke’s “boys” (Joe Pantoliano, George Wallace and Graham Beckel) are no help against these threats to his position, or the not-exactly-“accidents” that start befalling him, from a rattler in his golf bag to an explosion that takes out his Humvee-styled golf cart.

Yeah, Duke’s got a secret, one that puts him in danger. Suzie has a secret. And this new guy, Leo? He’s all secrets.

It’s a tricky thing at any age, cooking up funny lines for a cast of your contemporaries when you’re plainly not overhearing conversations in bars yourself any more.

Jones recites a Robert W. Service poem, Freeman sings “Silent Night, but they never have the lines that will turn their wariness (as big deal actors and famously prickly guys to deal with on a set) into on-screen “buddy picture” warmth. They’re pushing hard for laughs, like a car you’ve floored with the hand-brake still on.

Russo has the sass that Shelton immortalized in “Tin Cup,” but nothing funny to say or to play.

Jane Seymour comes off the best, as a metallic-haired mob moll (she plays all her scenes into a cell phone) trying to get somebody killed.

The villain she is talking to on those calls is a non-entity, the murder attempts aren’t funny, bit players make zero impression, with only one sight gag — Christmas carolers walking around the pool at Villa Capri, in Dickensian garb and flip flops — paying off.

“Just Getting Started” thus conjures up way too many feelings that one and all, especially Shelton, are just wrapping up their comic careers.

Credits: Directed by Ron Shelton, script by . A Broadgreen/eOne release.