Movie Review: Sarcastic Salinger becomes a literary icon in “Rebel in the Rye” 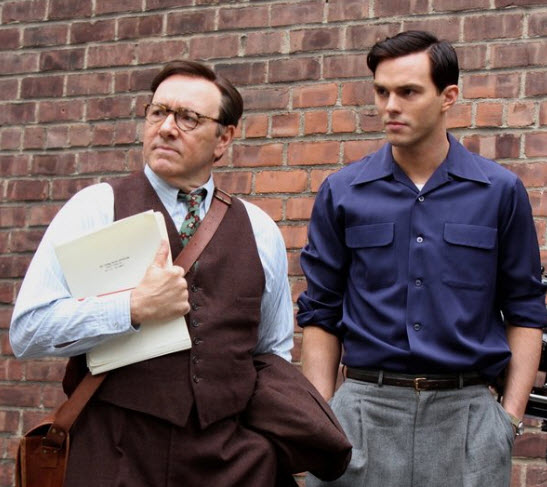 Although there are many ways to tell the story of how a writer’s life informs his or her talent, there’s something to be said for literary biographies that narrow their focus, zeroing on in a signal event that made a writer or made a career.

Truman Capote invents the “non-fiction novel” in “Capote,” which was about him writing “In Cold Blood.” Jane Austen experiences the heartbreak that will circumscribe her life and drive her fiction in “Becoming Jane.”

That’s the best part of “Rebel in the Rye,” the latest big screen attempt to get a handle on the prickly, standoffish genius who gave the world “The Catcher in the Rye.” Because what we’re really interested in is how Jerome David Salinger’s upper middle class upbringing, social limitations (he was half-Jewish) and World War II experiences informed his classic novel about that ultimate outsider — Holden Caulfield.

Actor-turned-writer Danny Strong and J.D. Salinger biographer Kenneth Slawenski manage that “the making of” story rather well. But they then struggle to shoehorn in a lot more of the man — his later years, avoiding the press, living in a remote corner of New Hampshire. While you can’t blame them for wanting to avoid something Salinger loathed — a “Hollywood ending” — the movie makes you wish they’d been clever enough to know when enough is enough, ending at the moment the book is published, blows up and sends the man into seclusion.

Nicholas Hoult (“Mad Max: Fury Road”) makes a less colorful and charismatic Salinger than we might have liked. He looks like Salinger and the script captures a hint of the sarcasm and cockiness that got him tossed from school after school, so sure of his own brilliance and appeal that he knows he’ll be a great writer. And the most eligible famous beauty his age in New York, Oona O’Neil (Zoey Deutch), daughter of the legendary playwright? Why not ask her out?

It takes that first great mentor — writer, publisher and Columbia University creative writing teacher Whit Burnett (Kevin Spacey) — to put him in his place and raise the bar on his writing. Their scenes have a light banter to them that hints at the tone the screenplay reaches for, but never achieves.

“You’re not the first wise-ass I’ve taught, you know.”

Jerry may haunt New York’s Stork Club and feed a passion for hot jazz. But he knows that “Uptown, I was a Jew. Downtown, I was a square.” All the encouragement his mother (Hope Davis, quite fine) can give his talent, his cruelly practical father (Victor Garber) takes away.

He’s old enough to know that his father “hides his Jewishness. First phony I ever met was on the day I was born.” But he’s too young to see the capricious, inconstant Miss O’Neil’s textbook “daddy” issues (She went on to marry Charlie Chaplin when he was well-over twice her age).

The film is framed within correspondence, a letter Jerry writes to Whit from “the nuthouse.” And the film sketches in the experiences — from heartache and disappointment to the horrors of D-Day and liberating a concentration camp — that put Salinger there.

Through it all, his imaginary muse, the one character Burnett insists will make him, ferments in Salinger’s head, providing the interior monologue that keeps life’s trials at arm’s length. Holden is the sarcastic misfit who rejects the “phonies” who dominate his world, who sees too much, feels too much, never fits in anywhere, who wants nothing more than to save little kids from this misery, from getting lost in the high weeds and falling off a cliff — to be their “Catcher in the Rye.”

The filmmakers do rather well at underlining or at least hitting on the integral components of Salinger’s art — his early appreciation for the wisdom of children (of his class), his uncompromising refusal to give in, even to The New Yorker, when others want to make his work more conventional, pat and upbeat. But the script is flat and linear, the dialogue mostly out of tune — utterly lacking crackle.

The casting is promising. Eric Bogosian plays Harold Ross, editor and doyenne of the magazine during it’s short fiction golden age. Sarah Paulson plays the agent who indulges Salinger, tries to salve his ego and smooth his rough edges. 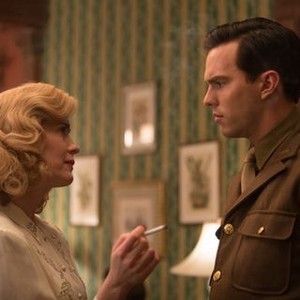 But where’s the wit? And I couldn’t help but wish for the movie to show me less. The complete Salinger has already been revealed in a terrific documentary. The even lower-budgeted “Coming Through the Rye,” about an aspiring writer hunting down Salinger, long secluded, and almost befriending him (Chris Cooper played the grumpy old man) comes closer to the mark at capturing what it was about Salinger’s writing about being young that connects with each generation.

For all the formative creative dots Strong and Salwenski strain to include, that’s something their informative and worthwhile film misses. They show us the rye, but not why Holden catches us and never lets go.

MPAA Rating: PG-13 for some language including sexual references, brief violence, and smoking

1 Response to Movie Review: Sarcastic Salinger becomes a literary icon in “Rebel in the Rye”