Movie Nation: Veteran players bring their A game to “The Wilde Wedding”

Posted on September 5, 2017 by rogerinorlando 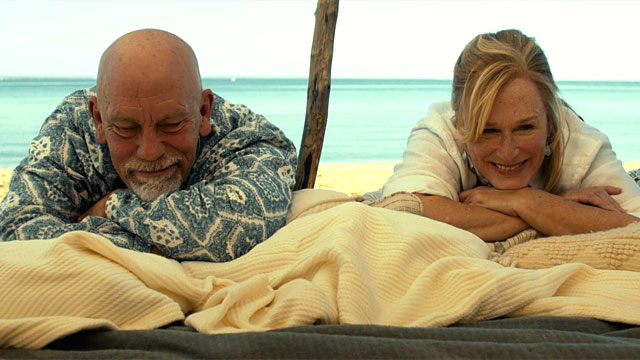 It took filmdom long enough to figure out that re-pairing Glen Close and John Malkovich, made-for-each-other in “Dangerous Liaisons,” was a good idea.

But it took just as long to realize that getting Patrick Stewart to grow out his hair is a transformative, liberating act.

So credit writer-director Damian Harris for making those two rarities come to pass in “The Wilde Wedding.” He found roles, and funny things to play, for an awful lot of under-used talent in this breezy, bawdy fourth-wedding farce about a retired movie star, divorced from a never-quite-broke-through actor ex-husband and about to marry a famous novelist.

Set in one of those movie-idyllic Something-on-the-Hudson mansions with that only-in-the-movies “Everybody come and stay here up to the nuptials” plots, “Wedding” makes Close, playing regal Oscar winner Eve Wilde (Olivia Wilde was, um, taken) gather her offspring and that beloved ex (Malkovich) for her fourth-time’s the charm wedding to famed British novelist Harold Alcott (Stewart).

Eve’s brood includes ex-musician Rory (Jack Davenport), whose career-before-commitment rock-star ex-wife (Minnie Driver) also shows up. There’s Ethan (Peter Facinelli), a pushing-40 horndog, and a few grandkids, most notably young Mackenzie (Grace Van Patten) who aims to make a documentary about the weekend — an over-used idea mercifully abandoned for much of the film.

Harris then packs MORE characters into this — promising a kissing cousins love-interest for the teen Mackenzie, and a lot of coupling/uncoupling and canoodling as we wait for “Do you take this man?” etc.

It’s a madly cluttered film, so good luck trying to pack all these people (Noah Emmerich, 52, is supposed to be a son of Malkovich, 63) onto the screen and giving them something to do. I had a hard time keeping them all straight, and I take notes.

What works beautifully are the grace notes to the craft of acting, to first love/first marriage. The florid, self-adoring Laurence (Malkovich) keeps the bitterness in check for the sake of his family and the woman he never quite got over — despite decades of chasing nubile starlets in her absence.

Eve is equally magnanimous — “Fame, success, flattery…I leave it ALL to you!”

The documentary idea, overused as it is, shows promise when Mackenzie asks people, on camera, “What does marriage mean to you?”

“My parents fighting, people getting divorced.”

Minnie Driver sings (as do others), and Stewart stands around as younger women note “MAJOR hottie, even for an old guy.”

The motto that everybody lives by for this one weekend is best expressed by novelist Harold — “I sometimes wonder if we should be saying ‘no’ to anything.” The young people — sexting/flirting, social-media shaming, mixing and matching, drinking and disrobing — take that to heart.

None of which adds a lot to the “Wilde” recipe, whose greatest glory and pleasure is putting players of a certain vintage together and watching how little effort they show, how they make it all look easy, sexy and magical when given cute roles and the chance to have a little fun with them.

MPAA Rating:R for language, sexual content and drug use.