Movie Review – “Barbershop: The Next Cut” 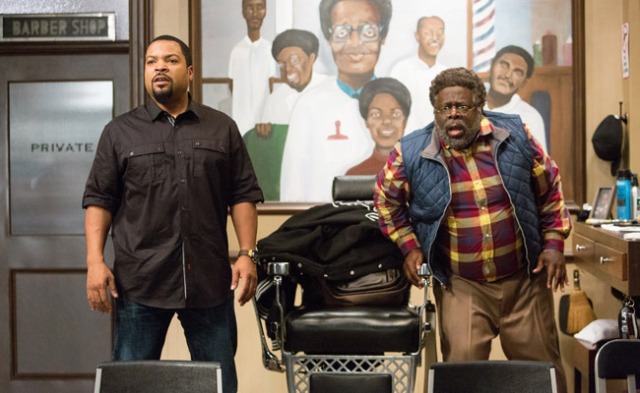 The cast is too dolled-up and the titular “Barbershop” has become a shiny, unisex salon. So “scruffy” and “scrappy” no longer applies to Ice Cube’s comic franchise.

But “Barbershop: The Next Cut” still has that patchwork, under-scripted feel, lurching from lowdown laughs to higher-purpose lecturing and preaching. There’s even more of the latter with this re-launch, an urban neighborhood comedy intent on addressing Chicago’s soaring, bullet-riddled murder rate.

However, there’s just enough slangy sass for this top-heavy cast to deliver chuckles and the occasional out-loud laugh. Which is more than “Meet the Blacks” or “Fifty Shades of Black,” which tried and failed to pander to the same audience, could manage.

But the neighborhood has gone to hell. Armed teens, as Eddie describes them, “a buncha conjugal visits gone bad,” have turned the area into a war zone. Calvin and his friend and business partner Rashad (Common) are both married and raising sons. The pressure for Calvin to move out and make a better life for young Jalen (Michael Reiney Jr.) is growing.

The debate over that and what they can do about the violence, the causes of that violence, Obama, sex and hair dominates the hubbub of the shop.

Lamorne Morris is the barber they all think is gay, Margot Bingham’s the stylist going for an Alicia Keys look, JB Smoove is the barber/hustler running all manner of side-businesses out of the chair he rents from Calvin.

And speaking of “top heavy,” and bottom heavy, Nicki Minaj, that parody of 21st century post-Kardashian femininity, is Draya, the bombshell stylist whose attention to Rashad is irking his “stylist to the stars” wife (Eve). 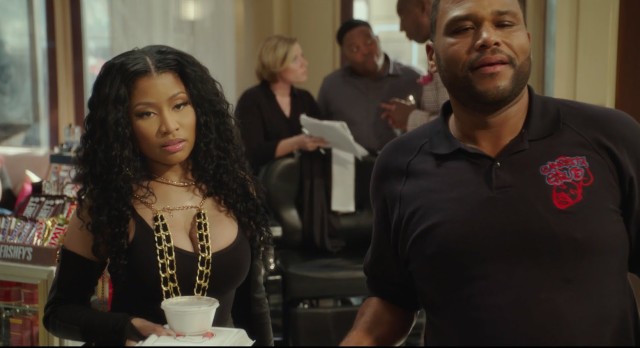 Everybody’s business is out in the open, argued about — loudly — within the earshot of everybody else.

“Out there,” meanwhile, the guns are still blazing, with gang-leaders Marquis (Jamal Woolard of “Notorious”) and Jay (Renell Gibs) threatening to bring the fight indoors. What’s worse, a local gang banger (Tyga) is giving Calvin’s kid the hard-sell, recruiting him. The city might take extreme measures against the whole neighborhood if the shooting doesn’t stop.

Anthony Anderson is the local entrepreneur whose food truck, “Gangsta Grub,” which serves “Soul food to save fool’s souls,” earns rebukes from Calvin about “sending the wrong message.”It’s petty to point out the comic irony of NWA founder Ice Cube lecturing his on-screen kid about trying to look “hard” when he isn’t, about wearing a belt with his pants, or chewing out somebody else for getting rich out of “gangsta” branding. But it’s worth a smirk.

The oversized cast means that nobody gets much of a chance to stand out, and the theatrical script breaks far too many scenes into stagey moments — characters declaring this or declaiming that.

“When was the last time you seen Barack Obama do something for us?”

The token in the room is Raja, and Indian-American (Utkarsh Ambudkar) inclined to critique black culture from the outside for its problems until he’s called on it.

“Black lives” matter jokes and Angie’s rip of Draya/Kardashian culture — “It’s a war, the good girls and the ho’s. And the ho’s have won,” stick. Beyonce gags (the salon is all about hair-relaxers and weaves) are tried.

Not much else does in this overlong, polished but drab civics lesson of a comedy. This “Barbershop” is in sore need of a trim, and not just a little off the top, either.