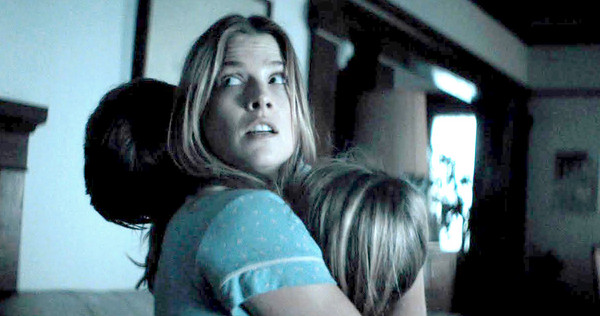 The little boy knows. He’s  seeing things.
“I heard you scream last night,” he tells his mother. She’s seeing them, too. And he knows it.

He comes home to see paranormal investigators packing up.

“They found something, didn’t they?”

“Mom, you know we have GOT to get out of this house!”

Mom is behind on the mortgage, has a “buy you out” hustler (Patrick Fischler)

throwing her a financial lifeline.

“We can’t leave this house!” she shouts.

Because she’s like the WORST MOTHER EVER. So it comes as no great shock in the third act of “The Diabolical,” that Mom (Ali Larter), scrambling away from mouthless ghouls in the dark, shouts to her kids — “UPSTAIRS!”

Because the worst mother ever wouldn’t realize that’s the most obvious dead end in all of horror — escaping “upstairs” when what you need to be doing is getting yourself and your two small children OUT OF THAT HOUSE.

“The Diabolical” is a standard issue haunted house picture with a third act twist that is supposed to justify all the illogical, unmotherly and moronic behavior that’s preceded it. It doesn’t.

Larter, most recently seen in TV’s “Legends” and “Heroes,” is Madison, the worst mom ever, who sees and hears things — mutters, “Not again” — and then closes her eyes and whispers “This is not real.”

Her son has been taught to do the same. But that isn’t working. Mom’s new scientist boyfriend (Arjun Gupta) seems to know a lot about this sort of thing. Hmm.

The apparitions in Alistair Legrand’s poor-to-middling thriller are impressive, Larter’s reactions a tad off. And that third act payoff needs a bit more foreshadowing (not that you can’t figure it out) to feel justified.

That lets “Diabolical” join the burgeoning ranks of half-hearted horror films that most of us don’t get around to watching because there’s not much reward for doing so.