Posted on April 7, 2015 by rogerinorlando 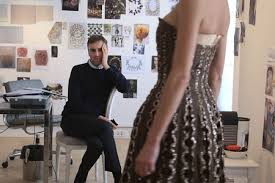 What happens when a self-described “menswear specialist” and “minimalist” champion of the “skinny black suit” takes over one of the most fabled fashion houses of Paris?
Read no further if you’re not a fashion maven, as “Dior and I” is not the movie for you. And even if it is, this undramatic and flat peek “inside” the sewing rooms of Christian Dior holds little in the way of entertainment.
Director Frédéric Tcheng had a hand in such fashion documentaries as “Valentino: The Last Emperor” and “Diana Vreeland: The Eye Has to Travel,” but he has neither the characters nor the potential conflict to make this one anything more than a 90 minute drift up to Belgian Raf Simons’ first show as creative director of the house that maintains founder Christian Dior’s “sublime legacy,” 55 years after the master’s death.
Tcheng touches on that history all too briefly before introducing us to the bland Simons, an artist who confesses, here and there, that he’s more “ready-to-wear than couture.”
Simons scores points for making it his business to meet the seamstresses who will be sewing his designs, straight off. These jolly women in white lab coats insist “the spirit” of the founder is still alive in the house he started, and dive into the designs that Simons comes up with or approves.
But the film, mostly in French with English subtitles — subtitles in white on a sea of white coats, white walls and white bolts and swatches of cloth (epic fail) — conveys little tension or sense of urgency in the eight weeks Simons had to make his mark. Oscar winners Marion Cotillard and Jennifer Lawrence, actress Sharon Stone and fashion arbiter Anna Wintour are glimpsed. But the behind-the-scenes, scenes-overheard nature of the filmmaking means there’s no one to explain to us the situation, no interviews questioning this guy’s selection and little, other than what we can sense just from body language, that suggests the tension and the stakes.
“Dior and I” belongs to a new sub-genre of documentary, films like “Ballet 422,” that give us great access “behind the scenes,” but zero insights as they do.