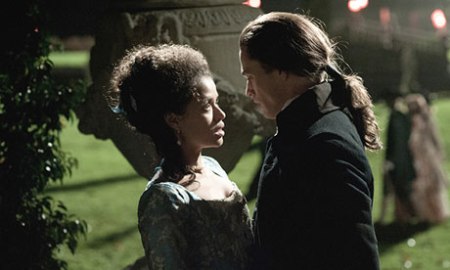 “Belle” is a movie that instantly joins the ranks of the screen’s great period piece romances.
Imagine a Jane Austen adaptation, with all its Empire waistlines and romantic longing, but a film in which the obstacles to love are far greater than mere social standing, a story that transcends its comedy of manners frame and is actually about something — slavery.
“Belle” is loosely based on the life of Dido Elizabeth Belle, the daughter of an aristocratic Royal Navy captain (Matthew Goode) and a Negro woman. That sort of thing happened in 18th century England, but polite people didn’t speak of it. And a child born of such a union faced a hard life of the same drudgery that faced England’s slaves and freed blacks — servants, as a class.
“I am here to take you to a good life,” her father says after her mother, whom he did not marry, dies. And so he does.
Belle, or “Dido,” as her new family calls her, comes to live at Kenwood House in Hampstead. She will be raised by her father’s uncle, Lord and Lady Mansfield (Tom Wilkinson and Emily Watson), and the Lord’s spinster sister (Penelope Wilton of “Downton Abbey”).
Her upbringing will be alternately kind and generous for its day, and circumscribed. “Papa” may say he is doing this “in accordance with your birthright,” but the Lord is keenly aware of his times. She will be companion to the other niece they’re raising, Elizabeth (Sarah Gadon) and enjoy all the education and privilege life has to offer.
But when company comes, Dido (Gugu Mbatha-Raw) will dine by herself. No sense shocking the proprieties of their guests.
“Too high in rank to dine with the servants,” Dido grows up to complain, “but too low to dine with the family?”
Hers is a future “without possibility of a suitable marriage.” Being smart, talented and unutterably beautiful, they may be writing Dido off a little too easily — even if this was the 18th century.
Tom Felton does a nasty Draco Malfoy-ish turn as a young swell who woos Elizabeth and disapproves of the attentions his brother (James Norton) is giving Dido. Sure, have your fun, he suggests, but one wants “a pure English Rose to decorate one’s home.” Still, Dido’s wealth has the boys’ snob of a mother (Miranda Richardson) seeing her with a more approving eye.
But Lord Mansfield has bigger things on his mind than mates for his nieces. He is Lord Chief Justice of the King’s Bench, and in 1783, all of Britain awaited his ruling on a case involving England’s “most important” business — the slave trade. And whatever tolerance he has developed raising the “cherished” Dido, the wrong ruling on an insurance claim for a cargo of dead slaves could be a bigger blow to the Empire than the recent loss of the American colonies.
Amma Assante’s film is very much a chamber piece, intimate and romantic, full of actors in beautiful period costumes requesting the pleasure of “taking a turn” about the grounds with one other. But it is breathtakingly ambitious for such a piece, taking us back to that age and letting us see slavery, in all its inhuman ugliness, through Mbatha-Raw’s huge, expressive eyes. She is a revelation, suggesting Dido’s curiosity and confusion at her odd station in life, and spirit that just wasn’t allowed in someone of her sex or race back then. Assante wisely keeps the camera close on Mbatha-Raw as Dido discovers what typically becomes of people of her skin color, and revels in Dido’s haughty dismissal of the passionate young abolitionist and would-be lawyer (Sam Reid) who sets off sparks every time they clash over class divisions, slavery and the Lord’s “duty.”
Misan Sagay’s script crackles with Austen-esque banter.
“Girls, will you REFRAIN from shrieking…like the blessed FRENCH!”
“Did you not listen to the rumors when you were spreading them, Mother?”
Beautifully cast, touchingly played and handsomely mounted, “Belle” is as close to perfect as any costumed romance has a right to be. This is a story Austen herself would have been proud to claim as one of her own, if polite young ladies ever talked of such things in polite company. And in its heartbreaking young star, the movies have a glorious new feminine ideal, as bedroom-eyed heart breaker or wide-eyed innocent, and an English Rose for the new millennium.

(Roger Moore interviews director and star about “Austen” and slavery and the portrait that launched the movie.)