Movie Review: “The Shape of Water”

Guillermo del Toro’s “The Shape of Water” is a lovely but hard-edged romantic fantasy,  a thriller built on a sentimentalized science fiction fan’s memories of the Cold War, the Space Race and “The Creature from the Black Lagoon.”

The director of “Pan’s Labyrinth” and “The Devil’s Backbone” has turned some of his “Pacific Rim” clout and effects expertise loose on a 1960s parable of science, humanity and loneliness.

And while it doesn’t really work as a parable and suffers from an uneven, contrived script riddled with violent, jarringly bloody shifts in tone, it’s a great showcase for a quartet of the finest character actors in the movies and a vivid recreation of a time via the lens of the movies that era produced.

Sally Hawkins (“Happy-Go-Lucky”) is Eliza, a lonely mute living above a movie theater in Baltimore in the early 1960s. She boils her eggs, lives in her head and masturbates in the tub, her limited life revolving around looking in on her aged, laid-off illustrator neighbor, “the proverbial starving artist” (Richard Jenkins), a gay alcoholic with too many cats and a misplaced passion for pies.

By night she’s a custodian, listening to the amusing prattle of her pal Zelda (Octavia Spencer) as they clean a secret, baroque government lab where the scientists and government functionaries would never give them a second look, and they themselves would never think to ask questions about what goes on there.

And then “the asset” arrives, something aquatic, locked in a tank. And with him comes a cruel security chief (Michael Shannon) and curious, quiet and sensitive scientist (Michael Stuhlbarg) in charge of experiments.

Just in case the archetypes and symbolism aren’t clear to all, the uptight sadist is named Strickland, and he carries a bloodied “Alabama how-de-do,” a cattle prod. He’s not sentimental about the “asset,” and he doesn’t want the cleaning crew getting attached to a science experiment with manatee eyes.

“That thing in there is an affront!”

Strickland’s a racist thug given to explaining commonly used words — “affront” and “trivial” to the woman who doesn’t talk and her black colleague, when he isn’t telling threatening tales from the Bible.

But Eliza isn’t dissuaded. She connects with the creature, which Strickland tortures. And as she does, teaching him (actor Doug Jones wears the rubber suit) sign language, she resolves to do something about his inhumane situation.  Cold War intrigue and an old-fashioned, officious “What we don’t understand, we vivisect” ethos complicate that.

I love the world the film conjures up, all tail-fins, neon, oppression and cathode ray tubes. Melding a save-the-cute-critter caper — “Turtle Diary” or for that matter, “Free Willy” — to a romance is inspired, if not a wholly original idea.

The cast is very good, with Shannon throwing everything he has at his menacing Role Model for Old Fashioned White Male Privilege. He’s so good he throws the picture out of balance. Hawkins may be getting the Oscar buzz, but for what? Learning sign language? This is Shannon’s movie and he is so ferocious you almost forget about the plot implausibilities that keep putting this character in that spot at a particular time.

The casting overall is so unimaginatively on-the-nose as to muzzle the effect of seeing great character actors play so deep within their comfort zones. 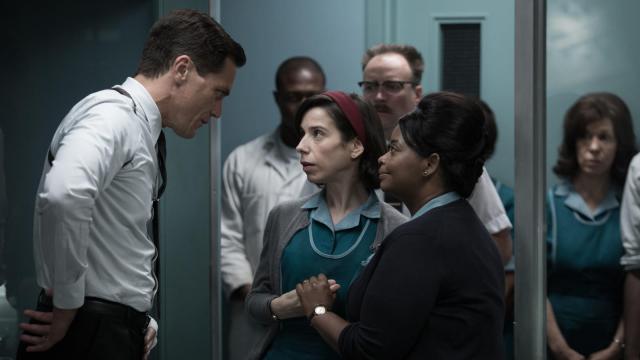 Michael Stuhlbarg as the intense, sensitive scientist with a secret? Richard Jenkins as a lovelorn neighbor?

Even Sally Hawkins, a wonder in many a movie, seems no stretch at all as our lonely spinster who makes the leap to interspecies romance with no more thought than “That’s what the script perfunctorily calls for.” Watch her in the grim primitive artist bio-pic “Maudie.” No sign language, but there’s a performance that sticks with you.

Whatever its larger goals, remembering how myopic and hateful the culture was before “tolerance” became the norm, “The Shape of Water” is first and foremost a genre picture. And as that, it’s a loving homage to cinema from an age where movies couldn’t be as obvious about this forbidden subject or that unspoken sexuality. It’s a good film of its type, just not a great one.

(Is “Shape of Water” borrowed from this student film?)