Movie Review: Anime depicts Japan on the home front in WWII “In This Corner of the World”

Decades into an ongoing fascination with Japanese cinema, I can still say the most revealing portraits I’ve seen of the home front there during World War II are animated — anime, cartoons.

It’s not as if the country’s cinema has never fully grappled with The War and its role in it. OK, that is pretty much true. Treating WWII with animation is in keeping with the culture’s reputation for distancing itself from the guilt of Japan’s genocidal aggression and treating even a sanitized, apologist take on the era at arm’s length — with drawings.

Hiyao Miyazake’s innocent-seeming biography of a feared warplane’s designer, “The Wind Rises,”  was far more loaded with nationalism and denial than “In this Corner of the World,” a somber, wistful look back at one young rural woman’s life from 1938, through Pearl Harbor to Hiroshima and ignominious defeat and occupation. But there’s a hint of the same reluctance to truly tackle the subject, even in a film as kitchen-sink circumscribed and detail-oriented as this one.

Suzu, our heroine and narrator voiced by the actress Non (the film is Japanese with English subtitles), grows up in Ebo, on the outskirts of Hiroshima. She’s a working-class daydreamer who loves to draw the sights — locals wandering across tidal flats, the hills, streets, waves and birds of her prefecture.

She takes care of her little sister and at 18, hasn’t given much thought to her future prospects. But as Japan girds for a widening war (Manchuria is mentioned), she finds herself betrothed to a sailor in distant Kure.

“They say a girl who holds her chopsticks long (from the short end) will marry far away,” Grandma always said. And so it is. Suzu is stuck with a city family intent on giving her much of the domestic work, and a haughty sister-in-law whose little girl she adores.

Working from the Japanese comic this is based on, director Kutao Katabuchi (“Princess Arete”) loses himself in the sights and settings of a lost, still partially-industrialized Japan. Wood and paper houses, homey markets, simple meals of sardines and herbs, rice and yams are Suzu’s world, so much so that she gets lost easily. Once she stumbles into this Navy town’s red light (Geisha) district, too innocent to wholly understand what she’s seeing.

The ebb and flow of an awkward, faintly affectionate marriage (to Shusaku, a Navy clerk) is captured, as is Suzu’s regret over the handsome childhood crush — on the rude, teasing Tetsu.

“The past and the paths we did not chose, there are like a dream,” her husband says, consolingly.

And then, isolated as they are — not totally kept in the dark by their government, but close — the war comes to them — Pearl Harbor, food rationing, military police crackdowns, dead friends and relatives, and then air raids. 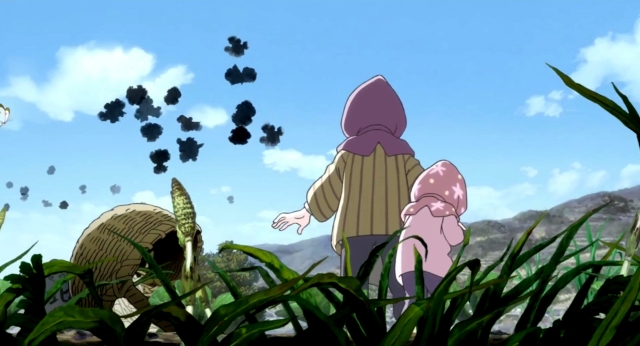 There’s Japanese pride in depicting the battleships (Yamato, among them) and carriers stationed in the bay, and the one solid piece of apologia in the script is remembering the “hardship” that disarmament brought to the local shipyard workers. Yes, Japan had to arm, invade and commit the Rape of Nanking to save the economy!

Truth be told, “In This Corner of the World” takes a very long time to get going. But like the animators, I found myself lost in the details of a world gone with the wind — street cars, sail-powered fishing boats, the “Fireless Stove of the Japanese Empire” (a way to conserve fuel). The combat scenes have a water color majesty, with violence as a shocking consequence of the beautiful planes suddenly dropping bombs, the flower-like blooms of anti-aircraft bursts raining shrapnel on neighborhoods.

And that water-color palette and carefully observed cityscape is a lovely distraction for the name we’ve heard is Suzu’s hometown, a place she longs to return to — Hiroshima.

Intended for domestic Japanese entertainment, “In This Corner of the World” is an eye-opening experience for those not of that corner of the Pacific. And it’s a reminder that making  pretty pictures out of painful history is just a tentative step toward actually grappling with that history, no matter how hard politicians and revisionists fight to keep that from happening.